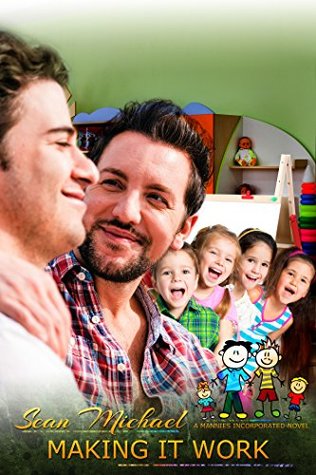 Part of the Mannies Incorporated series:

Parker has been Manny to Grif and Blue’s kids ever since the twins were first born. Fourteen years later, he’s caring for five kids and Grif is now a widower. Everything is about to change again for Park and his charges, though, as Grif is marrying a man with three girls of his own and the new family is moving to a big house they’ve built just outside of Ottawa.

Rand has been with his family since fifteen-year-old Josie was little, and he now finds himself transplanted from Austin, Texas to Ottawa, Canada when his charges’ father, Mike, marries Grif. Coming to a new house in a new country with a new blended family, he’s determined to make sure that even though they’ve been uprooted, his girls still have everything they want and need.

What could go wrong?

Park and Rand’s styles as mannies couldn’t be more different, the kids all hate each other on sight, and the newlywed fathers are busy honeymooning. It seems pretty clear the whole situation is a recipe for disaster. Can everyone find their place in this brand new family, including both mannies? And will Park and Rand ever see eye to eye on anything? The answer surprises even them.

Parker Bouchard guided the movers on where to put the last few boxes, shook their hands, handed over a check, and waved them off. Well, that was it. He had three boxes to finish unpacking in the kitchen, four or five—most of which were books—in the huge playroom just off the massive kitchen, and everything would be officially moved in.

There were still two boxes in the master suite—he’d felt uneasy unpacking the new husband’s personal belongings in there. He was sure Mike wouldn’t have minded that much, but Park liked to keep a little personal space between himself and the parents. He’d always needed to with Grif and Blue, who’d had no concept of personal space. Sure, he was a member of the family, but he was only the kids’ nanny, not everyone’s. Everything else was unpacked, and if the kids wanted to move their stuff around in their rooms, they totally could.

Now he was rattling around in the biggest house ever built for the new blended family he was charged with. He’d always figured that Grif would find someone new after Blue had died, he just hadn’t expected they’d be adding three more kids to the family when he did. Three kids who came with a manny of their own.

The family was coming back from the crazy honeymoon they’d gone on, complete with all eight kids but without the mannies. It was great to get a break, but Park thought they were both a little insane for having done it. Still, as far as he knew, no one had been arrested and no one had died, and they’d be home in two days. The other nanny—Rand—was arriving today.

Eight kids. Park wasn’t intimidated, though. He’d been managing five on his own for years, hell, he’d been with Grif and Blue since the twins, London and Paris, were just three days old, the two ‘creative’ fathers absolutely out of their depth when it came to two squealing babies. Adding three girls to the mix wasn’t going to be easy, but he’d bet, in the end, they’d be madder about the move out of the city than having to suddenly deal with new family. At any rate, he ran a tight ship and knew he could assimilate the new girls. Not Von Trapp–tight or military school–tight, but the kids were not wild children.

Moving into the bright kitchen, he put new grounds in the filter and turned on the coffee machine. It was too bad there weren’t any cookies, but he wasn’t going to make them until tomorrow. They’d be fresher that way. He grabbed an apple instead.

The front door opened and he heard, “Good Lord, look at this place. It’s the size of a cruise ship!”

That had him chuckling, and he headed through the kitchen to the huge living room/front hall/great room/whatever that made up the front third of the main floor of the house to greet who had to be the other manny.

“Hey there. I’m Parker Bouchard, but you can call me Park.”

He stopped, more than a little stunned. The kids had warned him that the Richards’ manny was a hippy, but he hadn’t thought they were serious. This guy wore two braids hanging to his waist on either side, a vest and a pair of baggy tie-dyed pants and rope sandals, and piercings in his lip, his ear, and in his nose. There was a guitar slung over one shoulder, a lean body covered in wildly colored tattoos, and a bright rainbow bag. “Rand. Rock on.”

“Right. Dude.” Because a guy like Rand had to be a dude, didn’t he? Park shook himself mentally. Be nice. He’d met Mike and the girls, and the girls were well-behaved young ladies. “I was just making a cup of coffee, we could sit and have a drink and I’ll give you the loonie-tour afterwards.”

“Works for me. I brought some kickass free-trade organic coffee from Austin, along with all the kids’ teas. I can’t wait to explore my grocery options.”

“Grocery options? I put in an order once a month online, there’s a half a cow in the freezer, and we get a green goods box every week for fruit and veg. I’ll just increase the order.” They had to combine the family, right?

“Yep. Penny is vegan. Josie is gluten free, and Carrie, at this point, only eats peanut butter and eggs.” The man put his guitar and bags down. “Lead on, MacDuff.”

“Is Josie allergic to gluten or have celiac disease?” He didn’t hold with different food for different kids, but allergies had to be worked around. He was even willing to find vegan options for the Penny as long as she followed through on that mindset in the rest of her life, too. But the youngest was SOL as far as being catered to went. If you were hungry, you ate. He led the way to the kitchen.

“She’s gluten-sensitive. It bothers her ADHD. No need to worry. I’ll cook for them. I have that down. I’m sure you heard about the horror when your brood visited. They couldn’t wait to get home to ‘real food’.” The last words came with air quotes.

“I don’t see why we have to make four different meals just to feed the kids. They’ll all have to learn to compromise. And your youngest needs to learn she eats what’s on hand or she doesn’t eat. You can’t let her dictate you like that or it’s going to expand into more than just food.”

He grabbed an extra mug and poured them each a coffee.

“Thanks for the input.” That didn’t sound even a bit like an agreement.