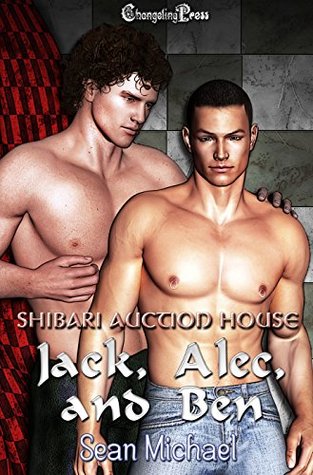 Three men risk it all to find the Master of their hearts at the Shibari Auction House.

Jack: When Jack's gambling debts catch up to him he decides to sell his time for three years to the highest bidder, hoping someone is willing to pay him enough to clear his debts for good. Is he jumping from the frying pan into the fire? Only time will tell.

Alec: Experienced sub Alec is back at the Shibari Auction House to sell two more years of his time after his master of ten years turns him in for a "newer model." Novice Top Benj can't believe anyone would throw the lovely Alec away or complain that he's too old and snaps Alec up for twice the asking price. Is it possible both men will find what they need together?

Ben: Three years ago, Ben let Master Lukas buy him over multiple evenings, only to cut and run when he felt himself beginning to fall for the perceptive and handsome Master. Now he's returning to the Shibari Auction House stage, but is he ready to pick up where he and Master Lukas left off? Only time will tell.

"Are you sure you're interested, sir? Forgive me for saying so, but..." The big, tall, Lurch-y man stared at him through wire-rimmed glasses. "...you're not exactly a common type here."

"There's money, right? Good money?" Jack watched Lurch nod. "Then I'm fucking interested." He had to come up with a quarter of a mil. Now, before someone had his head on a platter, kind of literally.

Ben Williams, the bartender at Glass Houses, had listened to him crying in his beer a couple of days ago and slipped him this business card. Shibari Auction House. Jack had told the guy he didn't have a damn thing left in the world. Nothing. He'd sold it all for that last desperate game. Triple or nothing. He got nothing.

It had taken him a little bit to figure it out, and a little bit longer than that even to get up the balls to call. Knowing that Mick Peterson was out there with a baseball bat and a switchblade helped.

"You do understand that you will enter a contract, yes?"

Jack nodded. After he called, he'd spent time with Ben, who'd told him that all sorts of things were possible -- personal assistants, security, even housekeeping -- but mainly this was sex stuff. With other guys, if you wanted the money.

God knew, he wanted the money.

"I do. You tell me what'll get me the best price, I'll do it. I'm not scared." Or proud. Hell, maybe after three years of doing... whatever, he wouldn't want to gamble any more.

"Well, obviously the more... esoteric terms are more costly." The thin lips pursed. "Body modifications and total submission are at the top, and --"

"Fine. Give me the list." He had two days left before the enforcers came hunting him.

"Length of time will make a difference as well." Lurch still wasn't handing over the list. "And anyone could buy you. Someone young, someone old..."

"Is three years good?" He didn't care about the other. It wasn't like he was going to get off. He started checking stuff off. "When it says body mods, they won't cut my balls off or nothing, right?"

"No, that would be castration. Body mods includes piercings and things like pearls slipped beneath your skin." One of Lurch's eyebrows went up, way up, as he continued to mark items as acceptable. "Three years will get you a good sum, especially with the number of items you're indicating you'll do."

Yves made a soft noise. "Are you even gay? Because trust me, we include that you are a virgin and your price goes up. Way up. But your... deflowering may not be all hearts and roses."

"Well, no one who buys you will break your legs or kill you." Yves shook his head. "If you really need a lot of money, I would suggest giving your virginity up with the rest. That really will be what increases your price."

"Not very well, it appears." Yves' tone was extremely dry.

Jack found himself laughing, hard. Hard enough that it hurt a little. "Yeah, I guess."

"If you'll finish filling that out, I'll send Bart in for the signing, and then Katie will help you with your grooming. If you want, and you're quick, we can get you on the bill for tonight's auction."