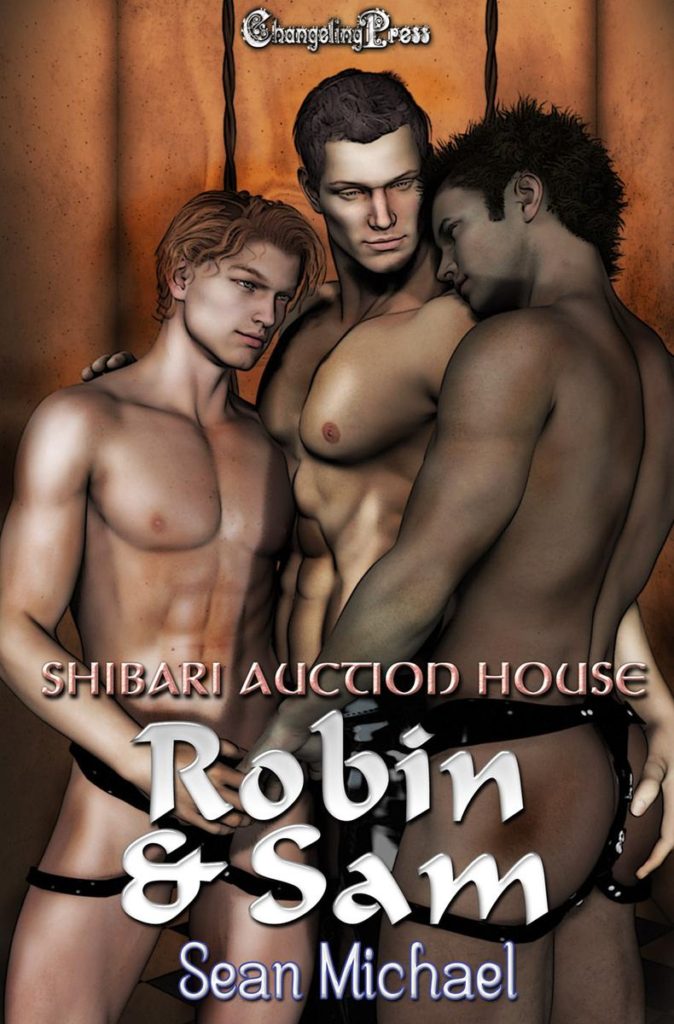 When Master Renard sees Robin and Sam on the night's auction block, he decides he must have them and makes a pre-emptive bid, wanting them in his playroom sooner than later. He's intrigued by the two boys who look so different and by the idea of having two boys at once to dominate.

Are they destined to find pleasure and happiness all together, or is this magical week going to end in tears?

Robin looked at Sam, who looked back, wide-eyed. "You're sure you want to do this, Sam?"

His best friend and lover nodded, took his hand and squeezed. "We... we do it for a week. One week. Hard-core submission with a professional. We can handle it."

Robin swallowed hard. "What if we can't?"

"What if it's awful?" They'd tried topping each other, tried meeting dominant men online, and tried the bars. It had all been a disaster.

Sam tugged his little goatee. Robin had been letting everything grow while Sam was all trimmed and coifed, just in case someone had a little shaving fetish. They were studies in opposites -- he was as Mexican as they came, while Sam's parents were both Irish and had given their son the green eyes, porcelain skin and red hair that came with it. He was a little bulkier than Sam -- Sam was a little taller. Everyone assumed he was the boss, but Sam made decisions for them, as a rule. They'd both taken a week off work at their tech jobs and signed up at the Shibari Auction House.

God. This was crazy.

"It's going to be so hot, Robin." Sam kissed his nose, grinned. "So fucking amazing."

There was a soft knock on the door and it opened. Yves, the tall, skinny man who'd signed them up, poked his head in. "I have a proposition for you."

Sam's head tilted and he stood, smoothing his jeans. "A proposition?"

"Yes. We put up the auction notice for this evening and an offer came in for the two of you. Two hundred thousand dollars, take it or leave it. Meaning it's a one-time offer. This bidder won't be at the auction this evening. But if you'd prefer to take your chances at the auction, that's your choice."

"Dollars?" Robin added. It was important.

Yves smiled. "Yes, indeed. And that is minus the Auction House's percentage. It's a nice chunk of change for a week's time. Should I leave you to discuss the matter?"

They both shook their heads and answered in tandem. "We'll take it."

"Excellent." Yves opened the laptop he'd been holding and set it down on the table. "I'll let the bidder know and the money will be transferred to your account immediately."

"'Okay." Robin was going to have to sit down. What was someone going to want to do to them for that kind of money?

"The bidder has read your terms and signed the contract abiding by them. I have his medical records on file. He's clean, as are the two of you, so condoms won't be necessary. I've sent you an email with his test results. And there you go." Yves pointed to the statement of their account. Two hundred thousand dollars and forty-nine cents.

The forty-nine cents was from before the deposit.

"When you're ready, there's a car waiting out front to take you to Master Renard."

"Master Renard." Robin tried the name out, feeling it on his tongue.

"That means fox in French," Sam whispered. "Do you think it's a trick?"

"Master Renard is an outstanding member of our community, and I assure you everyone is very well vetted. There are no tricks at the Shibari." Yves smiled. "If you need anything else, you know where to find me."

There was no reason to linger after Yves left, so they went out and down the hall again, to the front door. A limo was out there waiting for them.

"Wow. Spiffy." They headed over with their backpacks, hand in hand. Robin decided that it felt a little like the first day of school, somehow.

The driver got out and came around. "Robin and Sam?" At their nods, he held the door open for them.