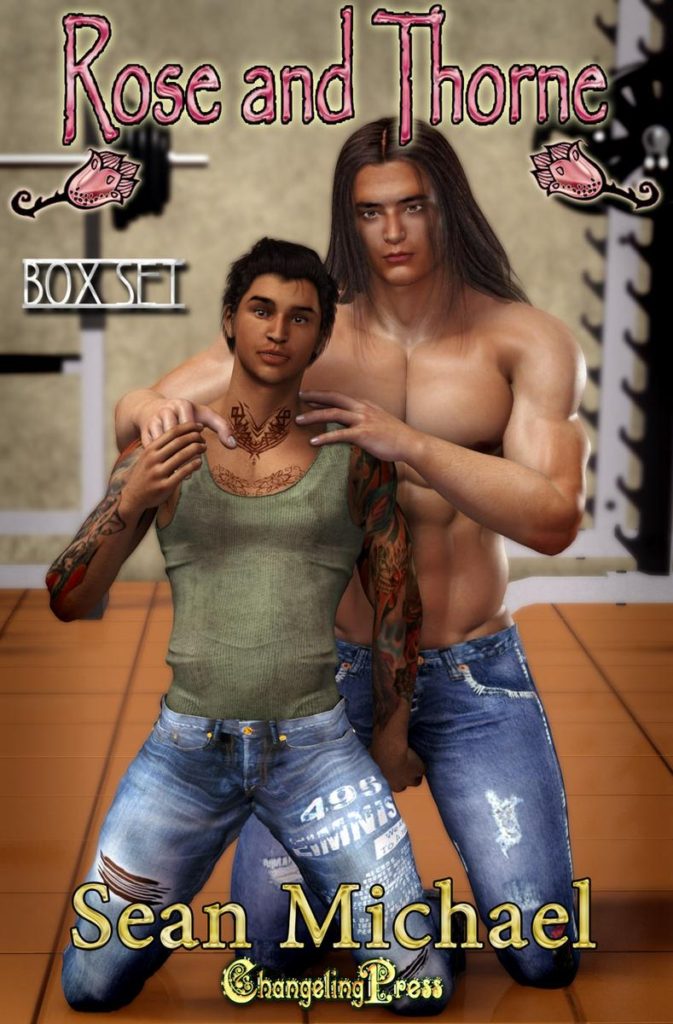 Part of the Rose and Thorne series:

Apparently Rose is just too big and scary to be a bouncer at the local club. He's considering going back into competitive bodybuilding when he meets Thorne. Short, slender and covered in ink, Thorne knows from the moment they meet Rose is the one.

Rose has been brought up to think things like spanking during sex are weird. Will Thorne be able to convince him whatever gets them off together is perfectly normal for them? And if he does, will Rose be able to take the next step -- calling Thorne Sir?

Fuck, he was in a shitty fucking mood.

Rose grabbed the weight bar and started lifting again, making his muscles burn as he worked pecs, then biceps, then pecs again. He'd lost another bouncing job, the bar manager saying that he was too big, too scary for the little girls and pussy boys who frequented the club.

He was the fucking bouncer. He was supposed to be scary.

He looked up at the speaker, finding a short, whipcord-lean man, covered in tattoos, and with the brightest green eyes, looking right at him.

"Been a day. I'll be done at this bench in two minutes." He'd taken his time.

"I'd say you were done about a half-dozen reps ago, but I'm no expert." This guy sounded... amused. Fucking amused.

Rose just grunted. Whatever. He wanted to sleep hard tonight.

"Who?" He looked around, wondering who the guy was curious about.

"In my experience, a man usually works that hard to try to impress someone, or to get over heartbreak."

Rose chuckled. "Lost my job, man. Just want to sleep it off." Like he needed some woman to work like this for.

"That sucks. What did you do?"

"I was a bouncer." He put the bar down, muscles trembling a little. Not enough, but a little. He wiped the bench down, the bar. "It's all yours."

"Whoa, wait a minute. A bouncer, and you got fired?" The guy looked him up and down and then up and down again, the looks like touches. "Why the hell did they fire you?"

"Because I'm big and scary and frightened the little twinks." Not that it was anyone's business.

The corner of the man's very lovely lips twitched. "Seriously? You're too scary to be a bouncer?"

"Apparently. Have a good one." Great. Scary and a joke. Goodie. He needed about a hundred leg curls and a beer.

"You look like you could use a drink." The guy had actually followed him to the leg machine.

"Maybe a couple of them." Rose loaded on two hundred pounds, kept another hundred for later.

"You got much longer here?" the guy asked.

Rose shrugged. "Until I get tired, I guess. I got nowhere else to be."

Rose blinked. He hadn't even started on his legs.

The guy smiled at him, one eyebrow going up.

The man held out his hand. "I'm Thorne."

"Rose Franks." He shook. The guy's grip was solid.

"Nice to meet you, Rose. So what do you say? Come have a beer with me. I'm better company than that weight machine, I promise."

He almost said no, but the fact that Thorne didn't give a shit about him having a girl's name pleased him.

Thorne nodded. "I need to hit the change room myself."

Rose went to the locker room and headed for the showers, washing his heavy mane of hair, scrubbing down. Weird. A light whistling started in the stall next to his. The sound was oddly comforting, easy. Good. Again, weird.

The whistling stopped and Thorne walked by, tiny towel wrapped around his waist. The guy looked even better without his clothes. Lots of ink on that skin. Rose had one little rosebud, low on his hip, but Thorne's ink was wild -- tribal patterns interwoven with hearts and faces and flowers and animals. There was a hole in the ink, on the left side of the man's chest.

Then Thorne was out of his sight as he turned the corner back into the change room.

Wow. That was hot. Rose thumped his cock, making sure no one could see, and then went to get dressed.

Thorne already had his jeans on -- in fact, he almost had his top on too, that bare chest back on display as the man's arms went up, getting into the T-shirt. Rose stood, watched, licking his lips. Thorne got the T-shirt on and bent, closing the Velcro flaps on a pair of sandals he'd slipped his feet into, offering Rose an amazing view of a tight little ass.