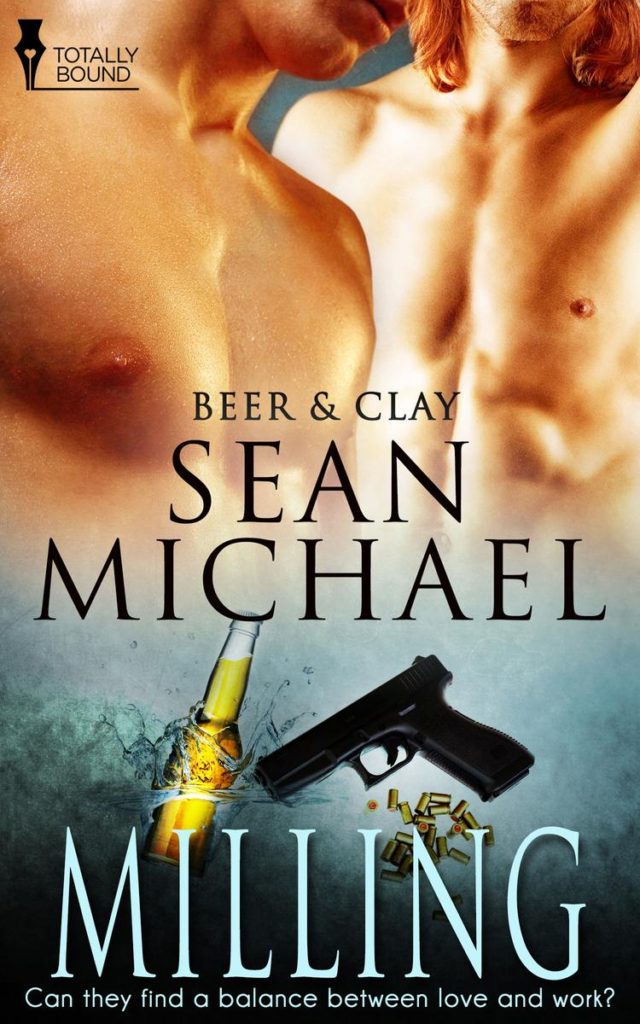 Toby and Damon’s whirlwind romance continues, but can they find a balance between love and work? Do they even want to?

Toby can scarcely believe that his life has changed so much in less than two weeks, but it has. His predictable little life has gone from routine to sexually adventurous in a matter of days. And to be honest, he wouldn’t have it any other way.

Damon’s just as into Toby, more interested in exploring with his new lover than spending all his time at the bar. Luckily things are running fairly smoothly there with his hand only occasionally needed on the rudder.

Their idyllic love affair has a few bumps to withstand, though, in the form of an intruder with a gun. Can Toby and Damon survive what happens next?

Damon finished his paperwork and online ordering for the Corner Pub, then double-checked his banking through the web access. He supposed it was too early to expect the deposit from the insurance—it hadn’t even been even a full week since the robbery and shooting. At least Bill was recovering. It could have been much worse and he wasn’t hurting for the cash.

Dealing with the insurance, with replacing what had been broken, and keeping his staff from freaking out had taken up a large amount of his time over the last few days. Between that and Toby needing to work in his studio, they’d not spent very much time together and it was beginning to make Damon itch. After a whirlwind week of hot and hotter running sex, plugs and piercings, he was feeling a little like he’d suddenly gone cold turkey.

Today, though… Today he was going to go sit for his boy. Toby was going to take pictures, and also do some work in clay while Damon posed, if he was inspired. Damon hoped Toby was. He also hoped to tempt Toby into some non-artistic fucking. Making sure he had lube and condoms in his front pocket, Damon locked the door to his office and stopped by the bar on his way out.

“I’m headed off for the day, Teddy. You call if you need anything, okay? And I mean anything.” It would be the first time he’d left the building while the bar was open since the shooting.

The big bartender gave him a confident smile. “You got it, boss. Don’t worry—we’re going to be fine.”

“I know it.” Damon was going to be positive about this. Things hadn’t gone great for the burglar the first time around—he wasn’t likely to come back for seconds.

Damon gave his place a last look, then headed out, planning to walk to Toby’s studio. It wasn’t all that far. Still, he’d not gone more than a block when he decided he didn’t want to wait and hailed a cab.

As the city flashed by, his anticipation rose and by the time he was getting out and paying the driver, he was more than halfway hard. It made climbing the stairs to Toby’s studio a little awkward, but so what? God, he had it bad. And he didn’t care.

Eagerly anticipating his lover, Damon tapped sharply on the door. He could hear the music from under the door, the sound vibrating the air with a dark, deep rhythm. He loved how Toby was uninhibited about his sensuality when it came to his art. Alone, in his studio, Toby let it all hang out and listened to his needs.

“Coming!” The door opened, and Toby stood there in the tiniest pair of soft shorts, a huge needy erection, and clay streaked everywhere. Damon could see the ring at the tip of Toby’s cock, pushing at the soft shorts. That had to be both driving Toby crazy and turning him on at the same time.

Damon licked his lips. How could Toby have ever thought himself undesirable? How could he have not been snapped up before Damon had done it? Thank God he hadn’t—Damon knew how lucky he was.

“You going to let me in, baby?” Damon’s voice was thick, colored by sudden, sharp desire.

“I am. I’m working. No bad touches.” Toby’s wild mass of red curls was tied in a topknot, wrapped in a bandana.

“No bad touches?” Damon closed the door behind him, reaching for all that skin.

“Uh-huh.” Toby’s pretty pink nips were hard as stones, calling for him.

Of course he couldn’t really play, not the way he wanted to. The piercings needed to heal. They also needed to stay clean. He was going to have to doctor them when Toby was done, clean up the clay.

“Oh, God…” Toby’s body moved with the music, hips punching with the bass. Fuck, that was hot.

“Not this.” Damon stepped closer, his fingers drifting down to trace Toby’s cock through his shorts. “Are you wearing a plug?”

He reached around with his other hand, rubbing Toby’s ass, then pressing along Toby’s crack. There was a flat base at Toby’s hole, promising wickedness.

“You’re needing,” Damon pointed out. “I’ll just help you out and then you can get back to it.” He jostled the end of the plug.

Keeping one hand on Toby’s ass so he could keep playing with the plug, Damon brought the other one to Toby’s balls, rolling them through the soft material of those shorty shorts. A dark spot appeared on the cloth, beginning to grow.

Humming, Damon went to his knees to take Toby’s covered cock into his mouth. He was gentle, mindful of the penis ring, but he did suck, pulling the flavor in and further wetting Toby’s shorts.

Damon kissed the head, then stood and gently worked the shorts over the tip of Toby’s cock, careful not to catch the glinting ring. Then he took Toby’s mouth, his tongue sliding in. His sweet boy pushed close, the sound he got pure, desperate sex.

Right. No touching. It was a good thing he was more apt to listen to Toby’s body than his words.