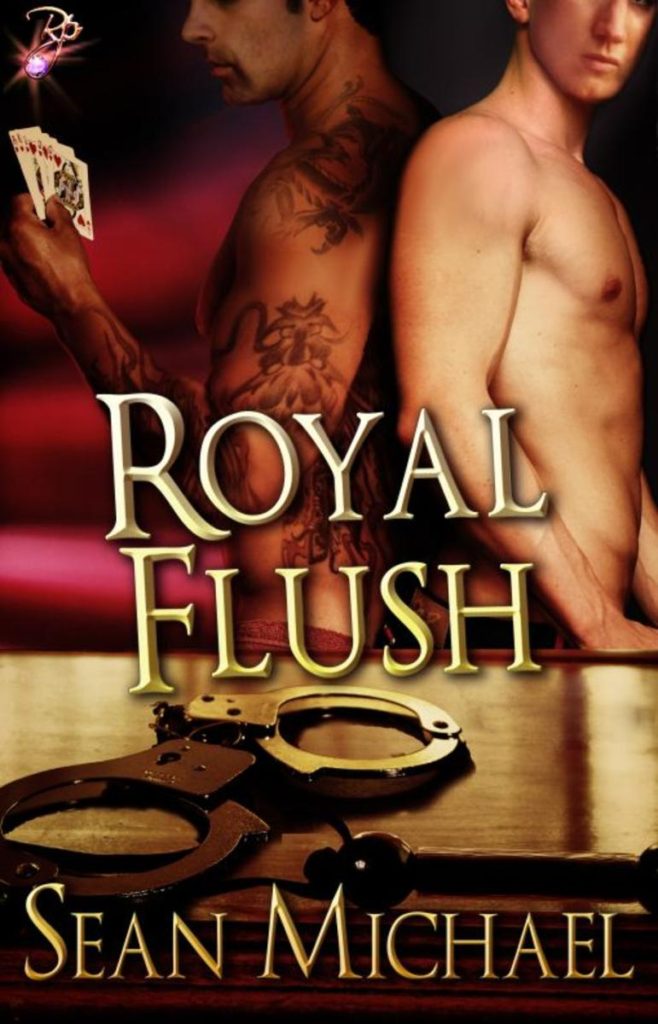 Three years ago, Royal played slave to Mike’s Master while working undercover in the leather community, and their relationship has never recovered. After a perp’s accusation of impropriety, Royal and Mike decide taking early retirement with a pension is easier than fighting false charges. Nursing his wounds in a bar, Royal’s interrupted by a man from his past, from the very time when things with Mike started disintegrating.

Big, bald, and tattooed, Bone is a piercer with confidence and attitude to spare. He can’t believe his luck, spotting Royal at the bar. Here’s Bone’s chance at the man he’s wanted since giving Royal a very intimate piercing for an undercover stint. “I bet you’re still wearing my ring,” he challenges Royal, hoping the man will not only take this bet, but the next one as well. In fact, Bone is betting their future happiness on it.

Royal sat at the bar and watched the whiskey swirl in his glass, the ice cubes clinking together, the scent of the liquor like spoiled cologne.

This shit sucked, so hard.

Ten years of working on the force. Eight years of working homicide. Three years deep undercover. Shit, he was the bastard who had helped collar Newt Lansome, the Craft Killer, and it only took one bad collar. One asshole swearing Royal had fudged with evidence and he…

Resign and keep your pension, or you and your partner can both get eaten alive by the fucking IA bastards.

It figured he had enough feelings, stupid as they were, about Mike that he’d agreed to the deal. Hell, he thought Mike was probably tickled. They’d never recovered from their last heavy case… Sure, Mike had known Royal was gay, but the undercover case had slammed it home to Mike in a way Royal’s former partner had obviously not wanted to know.

Royal shook his head, knocked back the booze, hoping it would ease things a bit.

A shadow fell over him and a low sexy chuckle sounded. “I bet you’re still wearing my ring.”

“What?” Surely no one was talking to him. Not here.

The guy leaned against the bar next to him, muscled body appearing, face coming into view. The guy was completely bald. There were about a dozen piercings in one ear, the other one empty. And tattoos… Royal could see a dragon’s head coming up over one shoulder, looking right at him from the dude’s neck.

“I said I bet you’re still wearing my ring.”

Bone. The piercer. The fucking stud of a piercer who’d put a ring in Royal’s cock.

Royal had been Collin then, and Mike had been Louis. Master Louis and his boy. Mike, who was the straightest man on earth, had been inadvertently fulfilling Royal’s dirtiest fantasies.

“I don’t know what you’re talking about.” Royal’s cock and the ring embedded in the tip bobbed in his jeans.

“Look, I don’t…” Royal didn’t look the same. He couldn’t. He had a beard now, hair shaggy and loose, and he wasn’t being the needy, kinky bottom boy.

“A hundred bucks says I’m right. Two seconds in the men’s, and it’s yours if I’m barking up the wrong tree.” That wicked smile flashed again. “But I’m not.”

“What do you want, man?” Royal couldn’t win that bet, so he wouldn’t take it.

He remembered watching Bone hold his cock, pierce it, slid the thick ring through his slit. Mike had thrown up afterward, just disgusted. Royal hadn’t thrown up, though. He hadn’t even wanted to.

“You’re pricklier than I remember.”

“You still on the job?” Bone had known. He’d been the one who’d told them what piercings a slave might have.

“No.” Bone had been their source, had taught them how to behave. Royal hadn’t been sure Mike would ever look at him again.

“So take the bet. We can change the terms. If you’re still wearing it, you give me a blow job; if you aren’t, I’ll give you one.”

Well, fuck. He just… Fuck. “How about double or nothing?”

“Sure.” Bone grinned, the look wicked. “I bet you want to give me that blow job.”

“And I bet you want to be on your knees for me. What’s the challenge?” He’d had just enough whiskey to be stupid.

“You’re the one who wanted to go double or nothing. You name the challenge.”

Bone snorted, shook his head. “How about I bet I can make you come without touching you? I do it; you come be my slut for the weekend. I don’t… You get whatever you want.”

“Whatever I want?” That was a pretty big fucking bet.

Bone looked him up and down, licked his lips. “Whatever you want.”

“Okay.” He’d jacked off this morning, and shit, he wasn’t in that oh-do-me-now space, so yeah. Yeah. He could hang with this.

Bone held out his hand, and they shook.

Bone let go slowly and signaled for a beer. “You want to do this here, or at a private booth?”

“Lead the way. Your ass will be my inspiration.”

Royal snorted, grabbed his whiskey, and headed into the back. “What brings you in this dive, man?” He’d never seen Bone here before.

One big shoulder shrugged. “I had an urge.”

“An urge.” Huh. The place was almost empty, only a few barflies hanging around.

“Yep.” Bone lounged in the seat across from him. “I’ve learned to follow my instincts.”

“You still working at the Needle and Pin?”

“I am. You still get off on being on your knees for your master?”

“No. No, that was only for the case. Just undercover work. I’m not on the force anymore.” And no one could know he got off on it. No one.

“You already told me you weren’t on the job anymore. And no one who subs as well as you do was only doing it for a case.”

“I was a good cop.” He wasn’t talking about this.

One of Bone’s eyebrows went up. “I never said you weren’t.”

“Whatever. I’m not a sub. It was a job. Nothing personal.” Nothing real. Mike hadn’t once sprung wood. Not once.

“It could be, though. It could be very personal.”

Royal’s cheeks heated, and he sipped at his whiskey. He wasn’t ever going there, not again.

“Why are you pretending the thought doesn’t turn you on? Why do you fight it so hard?”

“No? I held your cock in my hand, Royal. I put a ring in the tip. I gave you accessories to go with it. Did you ever play with them? Once the ring was healed?”

“You signed the consent form, and you used your real name, not your undercover name. And I never forget a face. Or a prick.”

Fuck, Royal was off-balance, and he just wanted this done, just wanted Bone to suck him dry.

“And yours is particularly beautiful. I wanted to know what it would taste like on my tongue. If your partner hadn’t been there, I’d have taken you down, taken the load you were so desperate to unload.”

His partner had been there, though, and the man hadn’t wanted him.

“I wanted to see you, Royal, kneeling for me. Covered in my marks. Shaved for me.” Bone leaned in, stared at him. “Wearing my ink, my rings, hole filled and spread.”

“I hated knowing that another man owned your submission, even if it wasn’t real. I wanted it to be real with me.”

“It wasn’t real.” He wasn’t into that, not for real. Only for the job.

“It could be. You could be tied spread eagle to my bed, a ring around your prick, mine in your mouth, fucking your lips.” Bone’s voice was low and growly, husky.

Royal shook his head, but Bone went on. “You could be cuffed to my chair while I fuck your cock, while I pierce your nipples. Naked and bound in the corner of the shop, my own sweet little pain slut, your cock chained to a ring on the floor.”

Oh, fuck. He slammed back his drink. Focus. Focus.

It wasn’t going to happen. No way. He shifted in his seat.