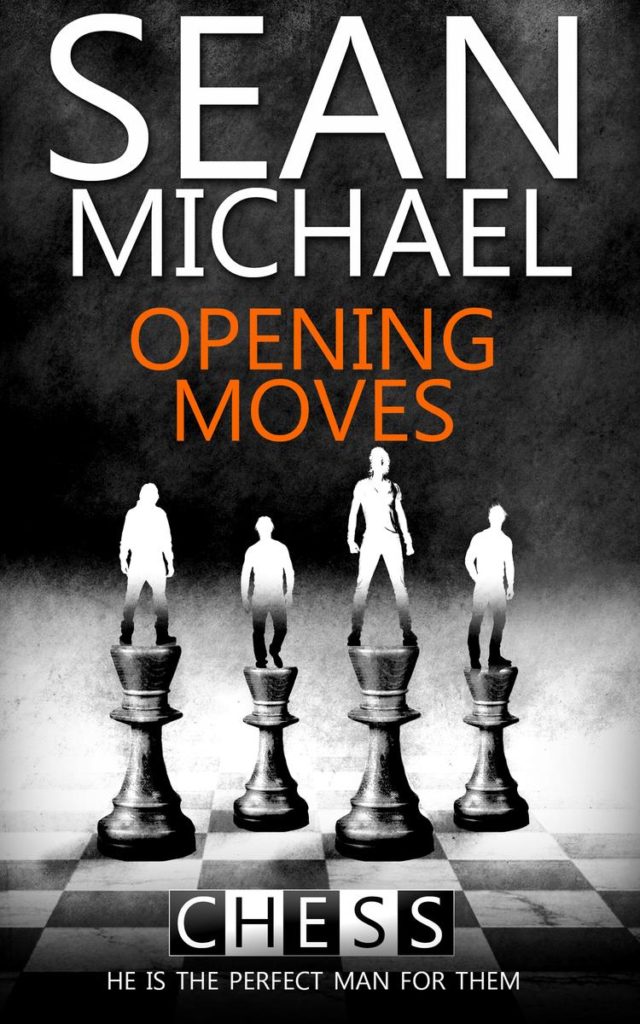 Join these sexy men as they make their Opening Moves.

Publisher's Note: This book was previously released under the same title. It has been expanded for re-release with Pride Publishing

Rook bounced as they headed toward the Z’va coffee house, walking between Knight and Bishop, his two favorite people in all the world. “He was a stud, Knight. He really was.”

“I told you.” Knight winked at him, goosed him gently. “O ye of little faith and large penis.”

He jumped at the goosing and rounded on Knight, his ire fading as he played the words back. “His was pretty impressive, too. You think it was just a shower? Or a grower, too?”

“That’s a damn shame.” Rook stepped back between them and looped a hand each through Knight’s and Bishop’s arms. He loved touching them. Hell, he loved them, plain and simple. “So. I know I’m not the only one who wants to do him six ways to Sunday.”

Bish snorted. “Or get done by him.”

“He might say no… You do realize this, dear boys.” Knight could be such a turd.

“You wouldn’t have suggested it if you believed that.”

Knight nodded, hips bumping his. “He’s got a great ass and the rumors are he’s unattached. A little gym bunny.”

“I didn’t get a good look at his ass, but the rest of him was vavavavoom!”

“I need a cup of coffee. I told him where we’d be. We’re sticking with the original plan, boys?”

A boy. A man. A lover. Someone for them to play with at will. They’d started talking about it late one night—the three of them naked and lazy, sprawled. Knight had been teasing Bish about getting a houseboy, someone they could touch, drive crazy. Boss around a little. Play with.

That had been Knight’s phrase. Play with.

Rook tried not to get excited, but damn. It wasn’t easy.

They piled into the shop, waved at Rick and Les. “The usual, boys?”

“Please. You and Bish go sit, I’ll get it.” He pulled his wallet out and sauntered up to the counter.

Rick grinned at him and Les made the black coffee, the mocha latte, and the triple espresso with a shot of caramel. “We haven’t seen you three in almost a week. I was going to send a search party.”

“If you promise it’ll be full of studs, it’ll be another week before we’re back.”

“Shit, I can’t afford that! Knight keeps me in business!”

He pouted. “Too bad. I guess we’ll have to keep finding our own studs.”

He handed over a twenty and waved away the offered change. Grabbing the tray, he headed to the table Knight and Bishop had chosen. Knight was straddling a chair backwards, Bishop’s hands on his lean shoulders, rubbing hard. Knight looked tired, but each touch seemed to make that sexy body to relax. Rook licked his lips. Who needed a search party of hotties when he had his two very own personal studs to love on?

The look on Knight’s face was pure bliss—lips parted, surrounded by goatee and mustache, the hair black as pitch.

“No orgasming in the coffee shop—they’ll throw us out again,” Rook teased, putting their coffees down on the table.

He grinned at Bishop, who just smiled back. “I’ll do you when we get home.”

It was probably for the best—he’d never met a massage he didn’t want to turn into more. Especially when Bish was the one dishing out the massage—you could feel the love in every touch.

Knight moaned, the sound like liquid sex. “Bish has the best hands.”

“He does.” Rook was getting hard. Between the look on Knight’s face and the memories of what exactly those hands could get up to…

He sat down and pulled his chair up to the table. Bish could make you beg, make you scream, make you hurt in ways that felt so fucking good after… And after… He never ever doubted that Bish loved him.

He tried not to whimper—he already had a reputation for being easy, so the last thing he needed was to get all hot and bothered by memories.

Knight met his gaze, near-black eyes dazed. “Tell me when you see him.”