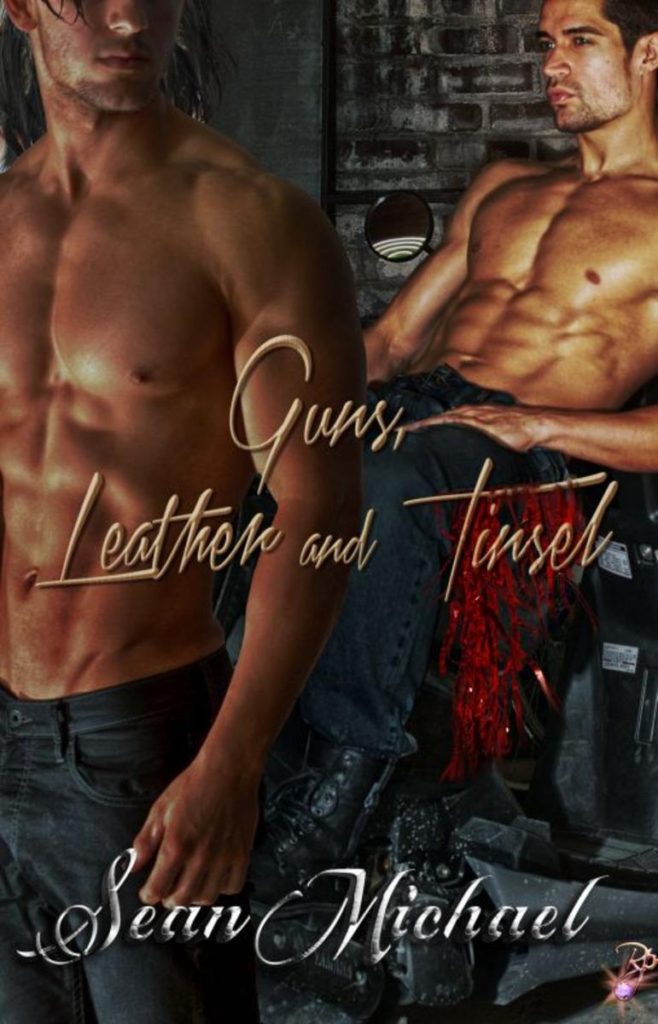 Undercover cop Brian “Boom” Simpson is working the week before Christmas so the guys with families don’t have to. He’s on the hunt for a motorcycle club that’s running guns. His work leads him to The Rusty Tailpipe, a biker bar just outside of town where the Bloody Sundays hang out.

Raptor Evans, owner of The Rusty Tailpipe, loves his life. He owns a bit of land, and his bar, where he doesn’t put up with any trouble, running a tight ship with the help of his trusty baseball bat. When Boom comes walking in, the drool worthy stud turns Raptor’s world upside down, in more ways than one.

“Damn it, y’all! You fucking break it up!” Fuck, Saturday nights were fun. Raptor Evans grabbed a baseball bat in one hand and a tire iron in the other and pushed through the counter hatch to wage a little war. The Black Sundays were a one-percenter, always causing issues, and Raptor was not having that shit in his club. Especially in the week leading up to Christmas.

He did his dead-level best not to interfere with club politics, because that led to drama and unnecessary horseshit, but no one—no one—fucked with his bar or his bartenders.

His bat hit the bar first in warning, then caught Ricky Dean in the ribs. “I said!”

Okay, that last one made his hand hurt some.

Little Bonnie gave him a quick grin and slipped back behind the bar. “Thanks, Boss.”

“Anytime, baby girl.” He passed the tire iron to Bonnie to set on the shelf beneath the cash, but held onto the bat for now, just in case.

She looked toward the door and whistled low. “Check out the new meat.”

The guy who’d just entered was head to toe in leather, muscles stretching the limits of the jacket he wore. Raptor tried not to drool.

“That’d be more your style, wouldn’t it?” She cackled at herself.

“Bitch.” He swatted her with the towel he kept tucked in the waistband of his pants.

Mr. Hot ‘n Studly in Leather came over to the bar and sat down, raising an eyebrow at Raptor’s bat.

“Sure. Whatever dark ale you’ve got on tap.”

“Sure.” Raptor pulled a Cabbie, let it cascade before handing it over. “Five bucks.”

The bill was handed over, the guy had amazing hands. Big, a few calluses, long fingers. “Thanks.”

Raptor did his best to hide a lingering look then did his thing, pouring beer and making drinks, changing kegs. Normal shit for a weekend.

Another skirmish broke out, one of the guys throwing a beer at the band. Raptor growled and called out a warning. “I’ll ban your skanky ass!”

“Saturday night. Gotta love it. New in town?” He was pleased for an excuse to spend more time looking at all those muscles in all that leather.

Raptor understood about not sharing a lot of personal info, though. So he wasn’t perturbed. “Cool. You need another?”

“Sure. Thanks.” Another two fives were handed over. “Keep the change.”

It might have been his imagination, but Raptor thought Studly was actually checking him out.

“Thanks man. You rock.” If nothing else, the dude was fine jack off material.

“I try.” He was given a wink, then Studly turned on his stool to look at the bar, checking everyone out.

Raptor took the hint and got back to work, keeping an eye on the bar, on the pool tables, making drinks and bopping his head to the music playing from the jukebox.

Studly was still there as things wound down, still nursing that second beer.

“Cool.” He started his late night routine, keeping an eye on everyone.

People began filtering out after last call when they lowered the music, and turned the lights up.

Studly stood, stretched. The man looked utterly fantastic. Raptor told himself to stop drooling. It was a natural reaction, though, he was built himself, but that big bastard could tear him up.

Catching his eye, Studly leaned in a bit. “You know where I can crash for a night or two?”

“You traveling?” Come home with me, man. I’ll turn you inside out. Or get you to tear my ass up.

“At the moment, yeah. Looking for a place to land.”

“There’s a motel down the road, but it’s a wreck.”

Raptor didn’t invite guys over to his place. Never. But dude, it was almost fucking Christmas. “I might be able to find a place. Give me a second.”