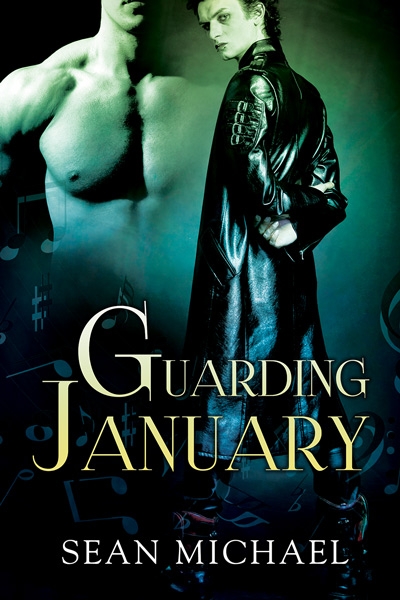 Lord January is at the top of the charts, only comes out at night, and is usually covered in blood. Say what you will, but the man knows how to put on a great show. But when the Vampire King is let out of rehab, the last thing he expects is someone forcing him to eat real food, hang out in the sun, and generally be a human being.

Rye Sommers, the best bodyguard in the business, has been hired to babysit a rock star whose biggest threat surprisingly isn't all the hard drugs, desperate groupies, and crazy fans—it's Lord January himself. But the closer Rye gets, the more LJ turns into sweet, gentle, caring Jeff Smart. He may still be the super-skinny, pierced and inked genius Lord January, but he is slowly shaking his death wish as he sheds the loneliness and exhaustion his stage persona saddled him with.

But as Rye falls in love with the real Jeff, he finds himself in over his head. He knows he can keep Lord January away from the drugs and the groupies, but saving Jeff might force Jeff to choose between his career as Lord January and his very life.

“Oh, honey, you know you can’t. You have all the tools to do this. You do.” His sponsor and the man who had become a friend stared at him, smiled.

“You look like Santa Claus when you do that.”

They looked at each other, and then they cracked up, leaning together, and if he cried a bit, Jim didn’t say a word.

“Come on. Donna sent a car for you, to take you home.”

“She sent a babysitter.”

He couldn’t even complain—he probably needed one—but couldn’t it be Jim? Couldn’t he stay there where he was safe?

He nodded, wrapped his hoodie around him, iPod in the pocket, put his sunglasses on, and hunched inside the fabric.

Jim gave him a short, hard hug, then walked him out the front door. Out into the world.

He winced away from the sunlight, tugging his hood down farther. “My things?”

“Already in the car, sir.” A mountain of a man threw him into shadow, and a huge paw was held out. “I’m Rye.”

The giant waited until he started down the walk, then paced him. “We’re the dark gray SUV to the right of the gate.”

“Okay.” He kept his head down, making sure the light and the long-range lenses couldn’t get to him.

He had to admit, having the Hulk walking next to him gave him some cover to hide behind, made him feel less exposed. Didn’t mean he suddenly wanted the babysitter, mind you.

The walk down the path seemed to take for-fucking-ever, but at last they were at the car, his minder opening the door for him and bundling him in. The door shut with a very final sounding click, and in seconds they were driving away from the one place he knew was safe.

Jeff put his earphones in and turned the music up loud, the noise pounding in his head.

He stayed in his cocoon until the door opened, his new bodyguard’s hand touching his arm. Aside from really tall and really built, the guy had short brown hair, like military cut almost, and a square jaw you’d expect some tough bodyguard to have. His new bodyguard’s eyes were surprisingly blue, like bright and alive. Jeff slid his gaze from the guy to the house.

Home sweet home. Goodie. He stood, the garage quiet and still. There were two doors down there—one to his rooms, one to the rest of the house where everyone else was. He grabbed his guitar, then headed to the door on the left, heading upstairs without a word.

Rye—that was what the guy had said his name was, right?—kept up with him, right behind him on the stairs like a shadow.

“These are my rooms.” He knew Donna would have had them searched, emptied of anything—uppers or downers.

He didn’t bother to argue, but he knew better. The guys in the band came and went, the groupies, people who called themselves friends. Technically his money had paid for the house, but it was a part of Lord January’s image and had very little to do with him.

Following him right to his bedroom, Rye put his bag from rehab down at the end of his bed.

“No.” He moved to sit in the huge overstuffed chair in the corner. “I think I’m just going to sleep. I’m not sure what Donna wants you to do, but I’m going to just rest for a couple of days. I don’t want company.”

“I’m not company. I’m your bodyguard. Whither thou goest, there shall I go.”

“I’m not going anywhere.” He was never leaving this room.

And even though he knew that was a lie, it was the one he was sticking with right now.

“Then neither am I.” Rye, the giant, smiled down at him. “Except maybe to make you a sandwich. Are you sure you’re not hungry?”

“I’m not hungry. Make yourself at home. I assume someone got you a room?”

“Somebody who? It’s just you and me.” Rye sat on his bed.

“There’s staff—a cook, housekeeper, all the people. Someone let you in.”

“The housekeeper comes in once a week now, and everyone else has been sent away. Ms. Heard didn’t feel you needed the distractions.” Rye dug into his pocket and pulled out a little ring of keys. “I let myself in.”

“Oh.” Jeff pulled the hoodie down farther, found another playlist on his phone, and put the earphones in, the music battering him, drowning out the world.

He wanted to go back to rehab.

He wanted to be safe.

“I’m going to make a sandwich and bring a chair in to sit with you. I won’t be long.”

He nodded and waited for Rye to leave. Then he went to the closet, took his shoes off, and grabbed a blanket. His stashbox was in the safe, right there, and he didn’t look at it. He just needed to have it in case.

He curled up in his chair, hid under his blanket, and went to sleep.

Once today was over, he could work on tomorrow being over too. One day at a time, and all that bullshit. Still, it was all he had.