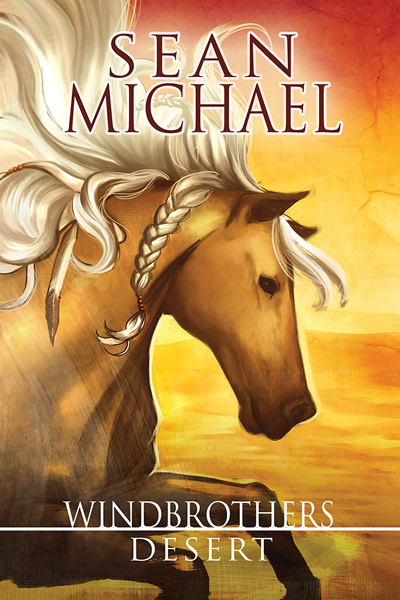 Part of the Windbrothers series:

Banished from his homeland, Surial is sent to Azize to run the family business. When he wins a slave, Kade, in a dog race, Surial is unsure what to do with him, as he doesn’t believe in slavery. Kade’s way with horses leads to him being relegated to the stables, where Surial becomes drawn to the big, quiet man.

A proud warrior at heart, Kade has been a slave for too long, and when he is passed to yet another owner, he goes without a fight, no hope left in him. When he discovers Surial’s secret, a fragile friendship blossoms between the unlikely master and the unwilling slave as Kade shows Surial that what lies within him is not a curse but a gift.

In a world of magic, Surial and Kade face their fears and hopes amid dangers that threaten both of them as their friendship is put to the test. What lies at the end of their trials is something more precious than either of them has ever dreamed of.

THE SANDS whisper. The faki that hunt us and call us peshir, call us animals, call us dogs and hags and evil—they tell their soft-bellied children that we get our magics from the asp and the black scorpion and the red spider that hides beneath the tiak branches and waits for her prey.

They are, of course, fools.

The sands sing to us, their children, leading us into the deep deserts to hide and then sending us back to where the infidels sleep. Our ways are the ways of the storm, building quietly beyond the dunes and then sweeping down, raining terror and blood and fears and then dissipating and leaving nothing but sand behind.

Yiama and Joat came to me, told me that a stranger was coming, sent by the sands. She would demand sacrifice, and she would share great knowledge—her stories would be of a time before the sands, when the water held no salt and our second children were not left for the wild dogs, but treasured as the first. Yiama said our visitor had been consort to the moon; Joat said that her touch welcomed death.

We have always paid the tribute the sands demand, but Yiama wept with fear and Joat ran into the sands, gouged out his own eyes. It seems somehow fitting that he should be the first sacrifice given up.

She came today, wrapped in a dark veil, over the dunes on a mount bleached pale. I knew, when I saw her, that she was Death and that she would demand great tribute for the honor of serving her. She feeds now, and then we shall speak, the Lady Death and I, about before and now and her wishes.

The sands whisper to me. They tell me that something is coming, and that this is just the beginning.