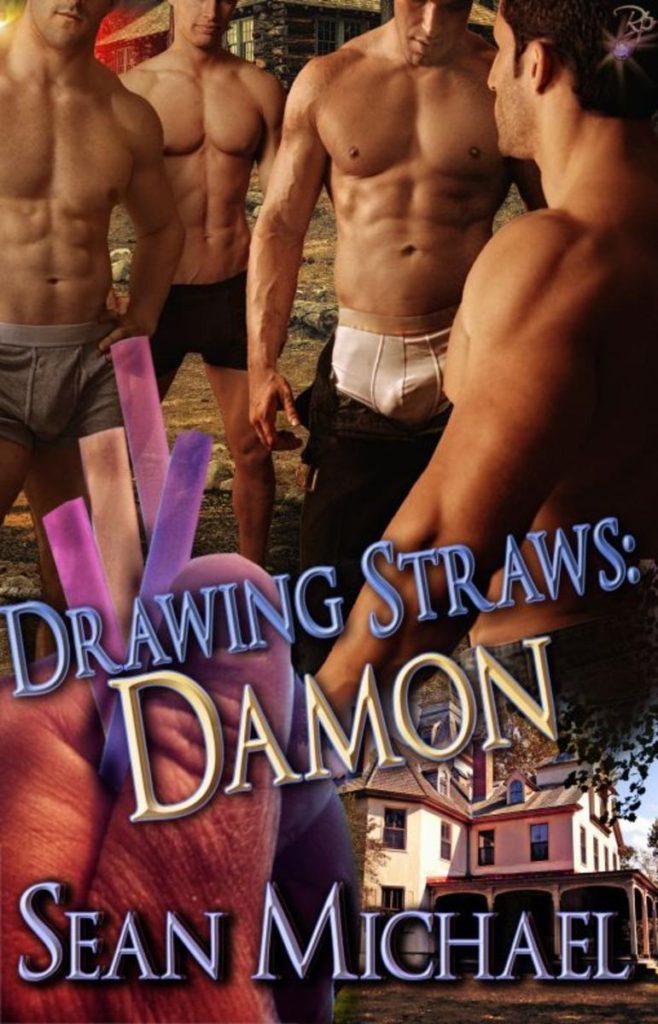 Part of the Drawing Straws series:

Damon, Erik, Joe and Tork return once again to their weekend getaway cabin and this time they have something to celebrate.

Damon is finished with his cancer treatments and the weekend starts with a welcome announcement and only gets better from there. Tork has another surprise for his men, though, one that will cement their lives together forever.

Join the foursome in this final installment of Drawing Straws.

Will Torkvinenndan pulled up in front of the cabin, the lights from inside looking warm and welcoming in the late September night. He was tired—it had been a long fucking week, and he hadn’t seen his guys in longer than that. He’d cleared his calendar, though. He had the whole weekend to look forward to, and, on top of that, new digs next week.

He might have zoned for a moment, his phone bringing him out of it. There was a text from Joe, asking where the hell he was. Shaking his head at himself and not bothering to respond, he grabbed his bag and headed in. He’d rather give his answer in person, thank you very much, instead of wasting any more time woolgathering.

Damon looked up, his dark fuzz of hair still short, but there, and so were the arched eyebrows. God, Tork had missed them.

Tork laughed. God, Damon looked good. Not great, not quite back to normal, but it had been over a week since he’d seen Damon, and he could see there was a marked improvement.

“Took my PET scan, Tork.” No beating around the bush, no making them wait to hear. Just straightforward Damon.

“Yeah?” Tork tried not to look as on the edge as he felt. This was it.

Joe and Erik both turned and stared. So Damon hadn’t told them either. Good. Damon had known they’d all want to be here for this.

“Yeah.” Damon took a deep breath. “I have to go back for another scan in six months and then six months after that, but…” Damon shrugged. “I’m clear.”

Tork let the words sink in. Hell, he thought they all were because none of them said anything for a long moment. Then he started to laugh, the sound pouring out of him as a huge weight he hadn’t even been aware he’d carried lifted from his shoulders. Damon was cancer-free.

Tork went and grabbed Damon up, hugging him as tight as he fucking could. He never wanted to let go.

Joe and Erik tackled them, the strong, muscled bodies surrounding them, and it was exactly right, this moment, the four of them holding each other, everyone here, everyone healthy, no threats hanging over them. It was a perfect fucking moment.

“That’s the best thing I’ve heard in a long fucking time, Cricket.” Joe’s grin was so big it looked like it was trying to eat his face.

“Me, too. Me, too.” Damon looked so pleased. “No more chemo. I get to officially come back to work in two weeks.”

“You’re happy about work? How about this?” Tork grabbed Damon’s ass. Work was the last thing on his mind right now. He wanted it to be damn low on Damon’s priority list, as well.

“This? Who says you’re getting hold of this?” Damon blinked his eyelashes rapidly, almost capturing an innocent look. Almost.

“You going to make us draw straws?” Tork knew he wasn’t the only one who wanted a piece of Damon’s ass. No, needed it.

Erik nodded. “Yeah, Cricket. It’s been so long since we’ve had anything resembling normal. We need to stake our claim.”

“You guys are so cheating.” Damon didn’t sound particularly put out by it, but Tork knew he needed to, at least, point out that they were totally breaking protocol.