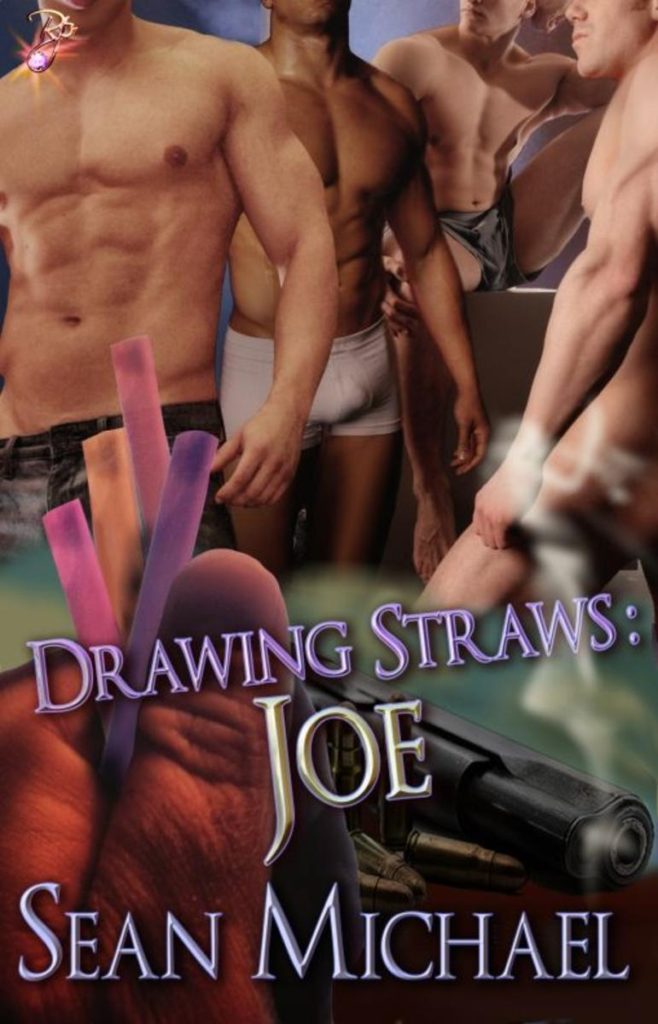 Part of the Drawing Straws series:

Damon, Erik, Tork and Joe are back again for another wild weekend together where they can all let go and really be themselves.

Can Damon, Erik and Tork help Joe deal with his troubles and send him home on Monday feeling ready to take on the world again?

William Torkvinenndan turned the hamburgers and then sat, drinking his beer. He’d come up early. Taking the extra day off had been just what he needed after three hard months working at the interdepartmental unit. Tork couldn’t remember the last time he’d had more than three hours of sleep. Making sure he was here for the full weekend became a top priority.

Chuckling, he watched his breath puff out in the cold; he’d expected he’d still be second or third here, not the first. So now he was on his own until someone else showed up. The burgers were to entice his brothers in blue - if you cook it, they will come.

The sound of a truck filled the air, cutting through the peace. Ah. Erik. Waiting for Erik to come through to the deck, he grinned as he remembered their last weekend. Erik had played sub and it had been glorious. Wouldn’t it be funny if Erik drew the short straw twice in a row after having gone so long without being the bottom?

“It’s a lot of fucking work.” Standing, Tork held open his arms, wrapping Erik in a strong hug. God, he’d missed this. The time between their weekends felt longer every time, even though it wasn’t.

Erik nodded and grabbed him, squeezed him tight. “Good to see you, man.”

“You too.” Tilting his head, Tork pressed their mouths together. Oh, fuck, Erik tasted good. All fucking male with salt and sweet - Erik must have eaten a doughnut on the way up. There was probably a fucking box of them on the kitchen table now.

Erik’s hand wrapped around Tork’s skull, the tongue fucking making Tork’s knees weak, and he cried out. Clinging to Erik, he let the man take his mouth. Barring when he got the short straw, no one else could, but they were a physical match - of a height, a size - and Erik knew how to kiss. It was fucking stunning. Damn, if he was the sub this weekend, he’d be more than happy for more of this. Tork opened wider, groaning, inviting Erik to continue.

“Been three months.” Tork didn’t have anyone outside of these men. Aside from not really having time, these were the guys he was into, he cared for, who cared for him.

“Want a quickie?” Erik asked, humping against him. “I got blue balls.”

“Oh, I have to see these blue balls of yours. I might take pictures.” He gave Erik a wink, nodded. “Hell, yes, I want a quickie. I’ve been here for three hours. On my own.” Nothing to do but think and wait and wish someone was there already to get off with.

“You don’t have to ask me twice.” Tork went to the barbeque and turned off the gas, then brought the cover down. It would have to do. Better to re-warm the burgers than have them completely dried out.

Food put off for later, Tork followed his favorite Greek God’s ass back into the house.

Erik started to strip down, that new knife wound from the last get together now covered with a tattoo - a black dagger pointing all the way down Erik’s belly.

“Jesus, ‘Rik that is stunning.” Tork moved closer and traced it with his fingers, the muscles of Erik’s abdomen fucking sexy.

“You like it?” Erik flexed those amazing muscles for him. “I got it during an undercover sting.”

“Shit yeah. It’s enticing.” He grinned, stroked his fingers over it again. “I want to lick it.”

Tork nodded, dropping to his knees and leaning in. He breathed in, pulling Erik’s scent deep into his lungs. He swore he could tell his men each by scent alone. Erik smelled of Speed Stick and grass and the barest hint of soap.

Opening his mouth, he slowly dragged his tongue over the handle of the dagger. Erik’s belly went rock hard, jerking at his touch. Moaning, he traced the rest of the knife with the tip of his tongue.

“Mmm. It covered the scar nicely, hmm?” Erik sounded pleased, and more than a little turned on.

“Yeah. I can still feel the scar under my tongue, though.” While he was here, Tork figured he might as well fish out that fucking amazing prick and have at it.