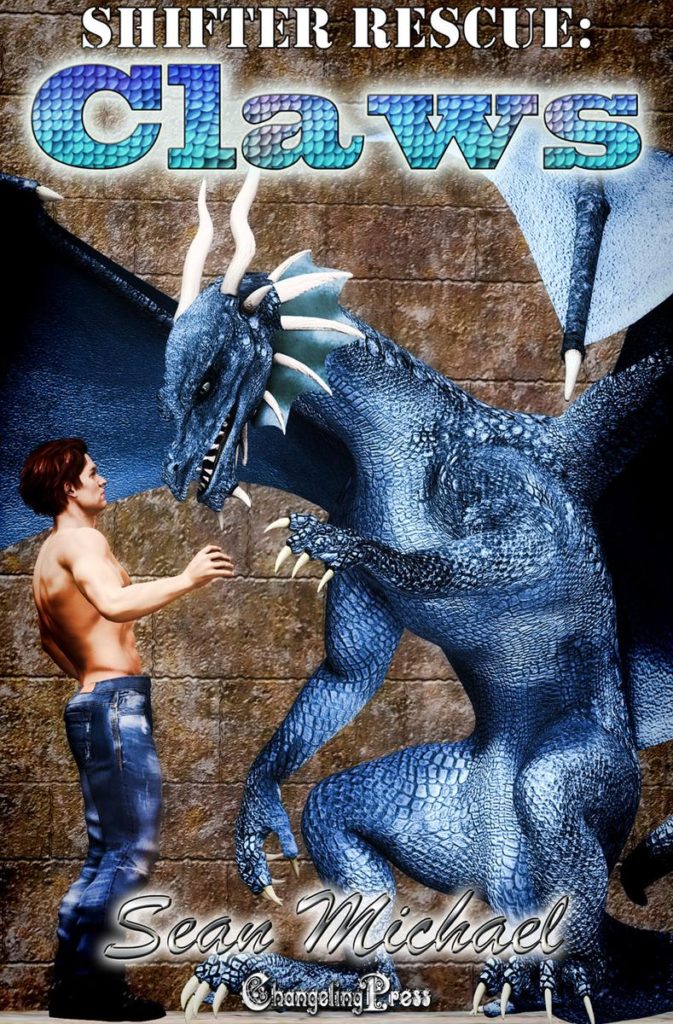 Now that Drill is Az, the dragon shifter's keeper, it's time for them to move out of the basement. Being the owner's brother has some perks and Pirou has renovated their rooms to include everything that could make a dragon shifter and a master happy. With a place of their own, Az and Drill are free to explore each other and their special relationship.

The slavers who first stole Az still want the dragon they lost, though, and when they attack, it exposes Az and Drill to the rest of the residents at the Old Tavern Club, including Drill's brother and club owner Drongo. Can Az and Drill survive the exposure?

It was the middle of the night, and Pirou had cleared the hallways of the Old Tavern Club so Drill and Az could move from the basement to their new rooms on the top floor. The club, a front for the shifter rescue organization Pirou managed, was empty at three a.m. and in the upper floors of the building, where many of their rescues lived, the residents were all in their apartments.

Drill was eager to get the dragon-rescue he'd claimed as his own, Az, out of their little room underground to one of the rooms on a higher floor where they'd have more room, sunlight and a view. A full fridge so Pirou didn't have to have more meat delivered to them three times a day. A huge bed, big sofas and chairs. A tub. He knew Az very badly wanted to bathe in water, and he was eager to share that with his dragon.

Now that the time to make the move was approaching, Az was, of course, hiding under the bed, and chewing his claws.

The knock at the door signaled that they were ready to go.

"We'll be right there, Pirou," Drill said softly through the door. Then he bent and looked under the bed. "Don't be afraid, Az."

"I can stay here in the safe," Az insisted.

"It'll be safe upstairs, too, Az. And in the halls, because you'll be with me." He couldn't blame Az, really -- the last time he'd been out in the open, he'd been taken by the slavers. Whereas he'd been safe here from the moment Pirou had rescued him.

"I know. But there's a huge tub waiting for you. A bigger bed. Sunlight." Drill knew these things would all be incentives.

"Sunlight." Az breathed the word like it was sacred.

Drill wondered, could his dragon do stairs or did he need to be human for that?

"Do you know what stairs are?" he asked.

"Okay. Good. Good. There are five flights." If Az couldn't work stairs they would risk meeting someone in the elevators, but the stairs would be better. Quieter, private.

He kept forgetting Az had no concept of so many of things he -- and most of the population -- took for granted. The results of spending his entire life in seclusion from humans. "Sections. There are five sets of stairs."

"And no one will take me away and poke me with needles?" Az asked.

"No." Just the thought made Drill growl. "I will kill anyone who tries." He would let his bear-wolf out and tear them to pieces.

Az slowly crawled out from under the bed.

"Oh, you're definitely going to need a bath when we get home." Drill brushed dust from Az's scales.

"Yes, my dragon. A water bath we can share together."

Az's eyes went wide, sparkling. There. Now they had motivation.

Drill opened the door and motioned for Az to come out with him. Az followed him, staying close, eyes huge and watching.

He rubbed Az's head as they got to the first set of stairs. "Okay. Five sets of eighteen stairs. There shouldn't be anyone in the stairwell."

Pirou had promised the way was clear, all the way up.

"Hey, you're fast. I think that's right, too." Drill was a little slower, but Az's math was right.

Az nodded, then zipped up the stairs, counting quickly. It made Drill blink, then he gave chase. His dragon had so many surprises in him. So many. He kept following the wicked-looking tail, never quite managing to catch up.

Az landed on the top stair. "Ninety!" His dragon was not the least bit out of breath, but Drill was panting pretty well.

Drill rubbed Az's head, stroked along his back, then knocked on the door out of the stairwell. "Is the corridor clear, Pirou?"

"It is," Pirou called through the stairwell door. "Come on, you'll share this floor with the boss."

Drill opened the hall door and drew Az through it. The only one in the corridor was Pirou, an encouraging smile on his face.

Drill rolled his eyes. "I love my brother, but he's my brother. There's nothing wrong with him, but he's far from perfect. Unless you're Pirou."

"He is Pirou's keeper?" Az asked as they followed Pirou to a door that had to be to their rooms.

Drill looked at Pirou, one eyebrow raised. Privately, he thought Pirou would very much like his brother to be exactly that. Keeper, master, sir, Dom, however you wanted to put it.

"I'll unlock your door for you." Pirou punched in the key on the number pad.

"You don't have an answer for Az?" Drill grinned and turned to his dragon. "Pirou would like my brother to be his keeper."

"Oh." Az went to Pirou, wrapped around him. "If you know it, you should claim him. Bite him."

Oh, fuck, that was the sweetest thing Drill had ever seen.