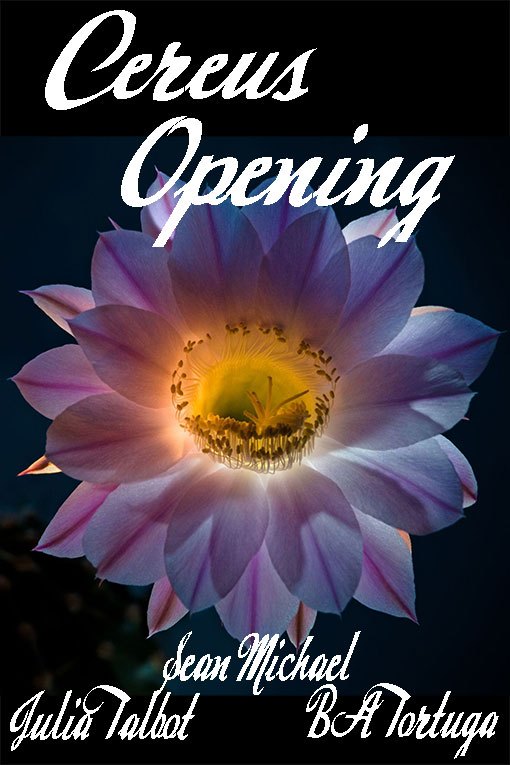 Now that his paranormal resort is built, owner Jonny and manager Duke are ready to open Cereus’ doors to their exclusive clientele. Unfortunately, in these three stories, not everything runs as smoothly as Duke would like, and he’s a werewolf on the verge of tearing his hair out.

In Pack Rules, by Julia Talbot and BA Tortuga, security experts Mik and Van have to learn to work together, even though they have a past, and one that didn’t end well. Werewolf Van wants his vampire back, but Mik is unwilling to be hurt again. Can they trust each other enough to solve their problems, and those of the club? In Downward Dog, Talbot and Tortuga tell the story of yoga instructor werewolf Rian, a city wolf with no way to cope with being courted by the native wildlife.

Finally, in The Bear Facts by Sean Michael, one of the first clients at Cereus, polar bear Nuk has special needs. He thinks IT guy Al is just the man to fulfill them, but will that leave Cereus, and Al, in the lurch? Find out in this second installment of the Cereus series. The Cereus series started off with book one, Cereus: Building.

The song Maneater started playing on Donovan’s phone for the third time in thirty minutes, and he sighed, rolling his eyes. He’d tried to get a meeting with Mik this morning, but the moody bastard was just not cooperating.

From start to almost finished, Mik had made this whole opening Cereus gig miserable. Donovan wished to hell someone had asked him who they should hire to do their electronic security. He could have recommended about ten guys who were not his fucking vindictive ex.

“Someone’s tampered with the cameras on the west side. You need to check them out.”

“Didn’t I just hire two guards? Radio Gene.” He was so not a lackey.

“I want someone I trust to do it.”

He stopped dead in his tracks, blinking. Donovan figured he was doing a good job not to stammer, stutter, or sputter. “You think it’s serious, then?” Donovan started toward the west side of the main resort compound.

“I don’t know. I don’t like it. Someone moved them on purpose.”

“Okay. What camera?” They’d agreed, after much arguing, on a system of letters and numbers. They had hundreds of cameras and they needed to be able to pinpoint them.

“Okay. I’ll check in when I see what’s going on.” He hit the end call button and started jogging. It would take ten minutes to get there since he hadn’t been smart enough to get a golf cart.

Soon one of his pack mates — a sweet little boy with an eager smile and a tight ass — was jogging alongside him. “Van. Where we going?”

He glanced over at… Raine? Rhys? Something. The kid was going to teach yoga to guests. He did a great downward dog. “West wall. Camera is out of whack.”

“Yeah? I’ll help.” Poor baby was bored to death and so eager to please. There wasn’t much call for yoga among the staff.

“Sure.” He was a good dog; he didn’t roll his eyes. He needed to talk to Duke about hiring a few more young guys like this. The kid was all of eighteen, maybe?

“Thanks. So. The cameras are broken? Do you think it’s going to snow?”

“The cameras have been moved. I think it will snow tonight, yeah.” Lord.

He stopped, scenting the wind. There was something familiar there, but Rian, that was it, was kind of obscuring it.

“Van?” Rian stopped, vibrating next to him. For a yoga guy, the kid was shivery.

“Something… I thought someone might be out here with us, but I was wrong.” He took off again, needing to get back to Mik on those cameras.

Rian kept up with him, jogging quickly, not breathless at all. Little shit.

When he got to W109 there was no one there, but the camera was turned literally backward, its range of motion completely skewed.

“Weird. Why would someone do that? There’s nothing over here but staff cabins.”

“Hell if I know. I bet the other ones are just the same.” He rejected the fleeting idea that Mik was testing him. Mik had said he trusted Donovan, and Mik rarely said anything he didn’t mean. Shit, the man rarely said dick at all.

He growled softly, resisting the urge to shift and smell. Rian had never seen how fast Donovan could change, and he wanted to keep it that way. It was kind of his secret weapon.

“Let me look at the others.”

“Okay. Do you want me to do something?”

“Nope.” He knew he should give Rian something to do; that would be the pack way. This was his job, though, not his social life.

“‘kay.” Rian headed to the edge of the tree line, nostrils flaring.

He had to scale the fence to check the last of the cameras. This one was more… covered. He swore it looked like someone had thrown a big old spitball at it. Something gross clung to the lens.

He’d grabbed a low-hanging branch and started wiping it free when his phone rang again. He teetered, but caught himself, sitting high on the fence and pulling out his phone. “Yeah?”

“What on earth are you doing with the camera? It’s a weird visual in here.”

“I’m in a tree, man. The camera had this weird white film on it.”

“White film? Strange.” He could hear Mik chewing on his lips again. Those big old chomper fangs and all…

“Okay. Okay, I’ll start going back. Damn it, I don’t need this shit right as the first guests are coming.”

“I’ll put a couple of the pack on patrol.” He was still hiring specialty staff, but there were plenty of guys who could pull double duty.

Argh. Asshat. He put his phone away and shimmied down. “Looks like we’re done, kiddo.”

“Cool. Did you figure out what was the deal?” Rian’s eyes just gleamed.

“Someone was dinking with the cameras. It looks more malicious than criminal.” He sure hoped that was the case.

“Probably, yeah.” It occurred to him that Rian had been right there, waiting to run with him. “Is there something you want to tell me, man? Did you see something?”

The smell of fresh blood hit his nose, the carcass of a deer splayed out there below the camera. It was not shredded, like someone had gone berserker on them, and it was laid out in a way that he could only assume was a message.

He had no idea what.

What happens when a besieged and rather small dragon comes to a vampire and says, "I need your help"? Or when that vampire comes to a werewolf and says, "I have a job for you"? The vampire goes and builds a resort for things that go bump in the night, deep in the Cascade Mountains. Riding the wave of Julia Talbot's Bloodrose series, the multi-author Cereus: The Building features paranormal romance Sean Michael, Julia Talbot and BA Tortuga.

Julia Talbot's It's Elemental features construction contractor Chayton, a werewolf who thinks demon decorator Kenny is a little fussy, and a lot hot. They argue about everything from feng shui to sex. Will they be able to resolve their differences?

The Third Course, by BA Tortuga, tells the story of Marco and Stephan, werecats, pridemates, and chefs who meet their match in head-bartender, Faelan, who just happens to be a growly, sexy Top.

Finally, Sean Michael's Smoke and Gold follows the head dominant of the club, Zee, who's dealing with trying to get his playrooms just so and trying to figure out maddening dragon, Daniel, at the same time. Who can resist loving a dragon?