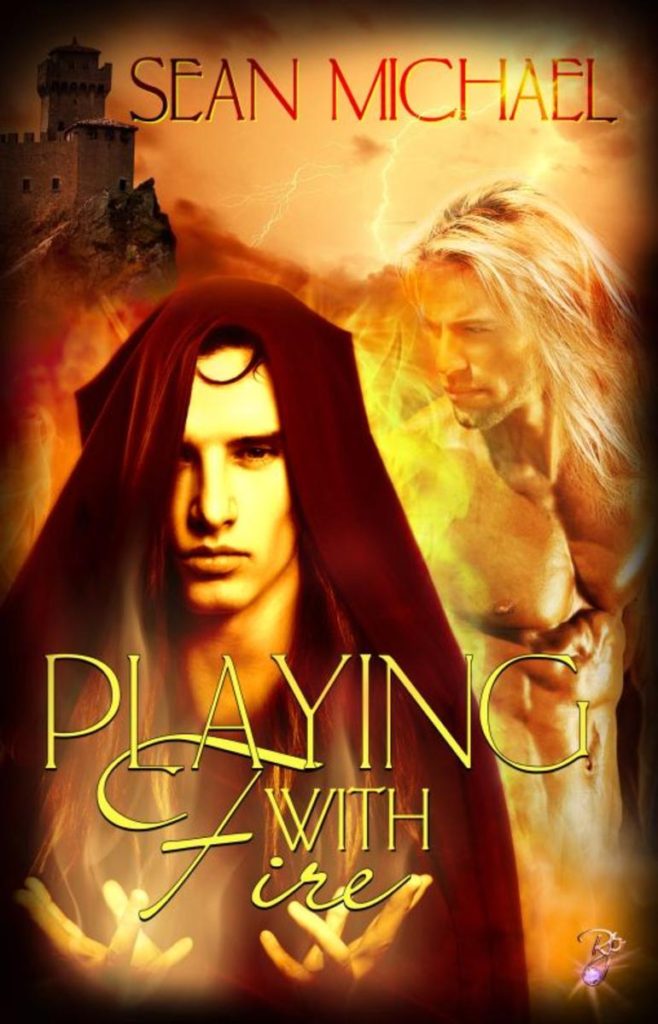 What happens when an uppity fire mage takes the son of a neighboring kingdom prisoner to teach him a lesson? Sparks, of course. Only in this case, where there’s smoke, there’s more than just fire. The Prince and the Mage both have their secrets to hide, leading the reader through an intricate dance of war, deception, and smoldering sexuality.

King Blethin was announced. King Blethin. The man had a nerve. This was what happened with the outlying lands, they put on airs and got uppity. Blethin was an older man, with a round wife and an heir in tow. A young, strapping son who was entirely not his type. Tall. Muscled. Golden skin. Long hair the color of wheat with shots of flame. And eyes like a midnight sky.

He purred, the sound familiar enough to make Rall tense.

“My Lord,” murmured the king, bowing. His wife curtseyed, but the prince just stood there, watching him, defiant, head held high.

“We have brought you the finest furs of our lands as a very small token of our friendship.” A cloak was handed to him, black and soft, warm. “The rest of the furs were left with your staff.”

The fur was lovely and Zujan nodded happily. “You are a generous man. How kind of you to attend.”

And to bring your prince to me.

“We are neighbors, my Lord. It was an honor to be invited.” The king all but tripped over his own tongue to lick Zujan’s boots. The prince however stood behind his father, still straight and proud, those blue eyes almost looking through him.

This was a proud one. A strong one.

“And will your companion introduce himself?” Come, lovely one. Speak to me.

“This is my son, Wintras.” The king made a hand gesture to his son, head jerking. “Bow to his Lordship,” the man hissed.

Wintras stood for a long time and then gave a half bow, eyes never leaving Zujan.

Zujan heard the shock ripple through his audience as one of his eyebrows arched and he tilted his head. “Wintras.”

“That’s what my father said.”

Blethin’s gasp was audible, the man going red at his son’s words.

“Attractive and observant. How very lucky you are, Blethin.” His voice cool and clipped. This one would need to be taught a lesson, lest anyone else think this was acceptable behavior. “Perhaps he is simply overtaken by my beauty.”

“Maybe I just don’t like having to give up our best furs to you on top of everything else you’ve stolen.”

The room went silent and Zujan hid his smile as he stood, the bar’cha appearing all around him, drawn to his anger and his need to punish. Poor stupid little fool. “You misspeak, boy. All I have is mine to take.”

The prince stood his ground, cocky and confident, arrogant. “I stand by my words.”

An older man, an Earl hurried over. “Please, your majesty, my lord. The boy is young...”

“I am the Prince of the Western Lands. When I take my father’s place I will end your terror of my people.”

Zujan held out one hand, a flame appearing, the air in the ballroom going cold. “You have not yet learned terror, young one.”

Heavens and skies, he was having fun.

“You think a few party tricks are going to teach me of it?” Those amazing blue eyes were steady, watching him, challenging him.

“No.” He was hoping they wouldn’t – this was the most entertainment he’d had in years. Zujan turned to the Queen, smiling into her tear-filled eyes. “I will offer you the choice, Lady. Give your son to me or I will roast him where he stands.”

She fell to her knees, her husband joining her. “Please, your lordship, please spare his life!”

“Get up,” growled the prince. “Stop debasing yourselves.”

Zujan ignored the boy’s words, instead accepting the mother’s. “Excellent.” He snapped his fingers, his guards appearing immediately. “Take the prince down to the dungeons and get him well-settled.”

“You can’t just take me prisoner!”

“Of course not. Your family just offered you to me, in front of all my company.” He waved his hand idly. “Take him away.”

“You intimidated them!” The prince didn’t fight his captors, glaring at him instead.

Blethin had joined his wife in mewling. They were getting boring.

Zujan watched the bar’cha do as they wanted, watching as they moved in and around his guests, swirling and heating. The play continued until worried nobles began to swat at his bar’cha, at which point they attacked, stroking with their burning touch. Sitting again, Zujan relished the chaos, fingers returning to Rall’s hair. “Are you enjoying yourself, pet?”

“Stop this! You are a madman!” Wintras shouted at him from across the room as the guards dragged him away. “Rush him! There are many of you and only one of him! He’s insane!”

“They’re so entertaining those first few days, don’t you agree?” He smiled coldly at the king and his wife. “It is by his own lack of self-control that he goes. He will not be permanently harmed — assuming he learns, of course.”

“Thank you for sparing him, your majesty,” whimpered the queen.

“You are merciful,” added the king, jeweled fingers shaking.

And the owner of some lovely furs.