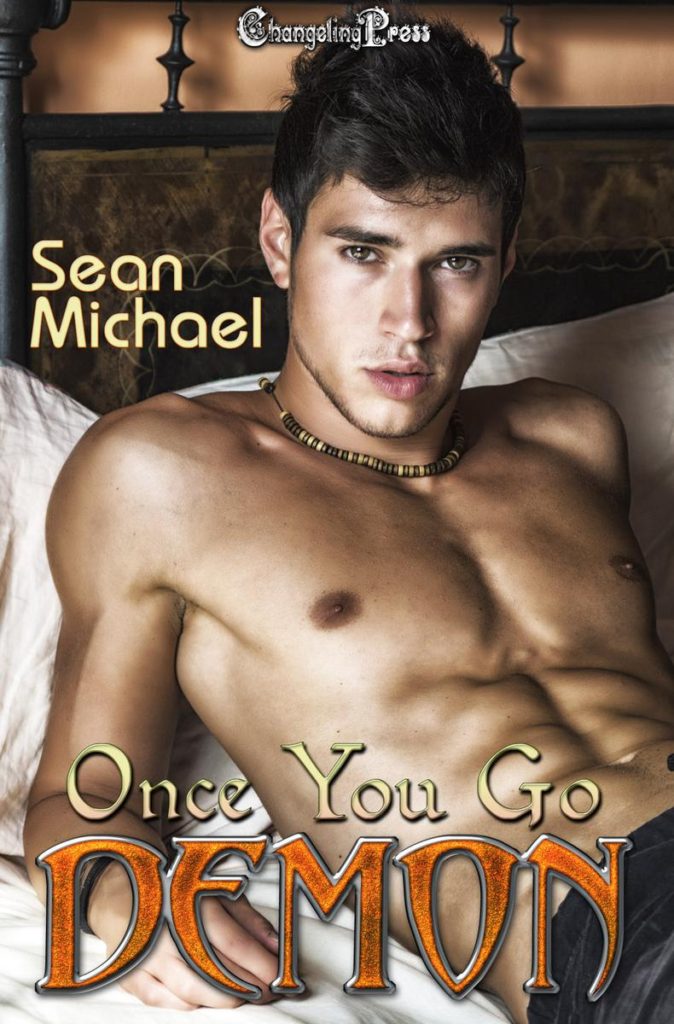 There's a shift of power happening in Hell, and nothing will ever be the same.

Kerr has been with High Demon Horatio's household since his age of majority. A natural submissive pleasure demon, for the last seven years he has been untouched by his master Horatio and his job has morphed into a more managerial role. Still, it's a shock when goons from Master Belial's house arrive at his doorstep to inform him he's been sold and his new master expects him to come immediately.

Lost by Horatio in a card game, Kerr finds himself in the Belial household, where Ceris, Master of the Harem, takes Kerr under his wing. Kerr is not only honored and used as he was made to be, but he is given a newly acquired demon, Harmony, as his own to train. The three pleasure demons have a rocky start, but they have all the time in Hell to figure out how to work together, and it isn't long before they begin to care for one another.

Meanwhile, Belial has waited for thousands of years for Horatio to admit he's actually a submissive. When it appears that's never going to happen, Belial arranges for his best friend to lose a card game in which he's offered himself as the prize. Horatio can't believe Belial would do this for him, but the council puts their seal of approval on the bet, and he has no choice but to offer himself to Belial, who immediately gets to work convincing Horatio that he'll be so much happier as Belial's sub.

Will Kerr and Horatio find joy in their places in the Belial household? Only time will tell.

Publisher's Note: The novel Once You Go Demon by Sean Michael was available briefly from another house.

Kerr stared at the paper the incredibly well dressed goons at the door handed him.

He'd been sold into Horatio Liverage's house to act as the man's submissive since he was of maturity, and now, after so long, Horatio had sold him without a word? Without a note?

"There must be a mistake."

The goon pointed one clawed finger at the insignia at the bottom of the page. "What does that signify?"

"Horatio Liverage." He couldn't deny it was his master's seal.

"Then there isn't a mistake. Bring us Kerr, and we'll be on our way." The teeth on the guy doing the talking brooked no argument. Neither did the tufts of smoke coming out of Silent and Scary's ears.

"I'm Kerr. I have to gather my things, make arrangements..." Right? Didn't he get that much at least?

The lower demon looked at the contract again. "It doesn't say anything about belongings here. Let's go."

"I have precious things that hold my family name, and it doesn't say that I can't bring them. I am not resisting, simply gathering my stuff." He could bargain with the best of them. He knew he had to convince them, though, as either one of them could pick him up and toss him over a shoulder without even trying.

Henchman One turned to Henchman Two, who shrugged.

"Is your master here? He can decide."

"He is not. He's away. As such, I am second in charge of the household." He held no illusions that he was beloved or even a lover, but he was well trusted with finances and with all aspects of Horatio's life. "I shall return in moments."

He began to pack -- the stash of jewels he had been collecting for years, his few precious books, his favorite clothes, and the music and computer that were his. He grabbed his toiletries, the hologram of his sire and dam, and the fragile glass orb that throbbed with a sweet, gentle light.

Both goons were frowning when he came back, pushing the pallet of his things.

"We won't be party to you stealing from your master."

"I haven't stolen a thing. These things are my own and now go with me to my new master." Fuckers. Horatio might be able to sell him on a whim, but these were his possessions and they were going with him.

They looked at each other again, shrugged, and turned, heading down the walk toward the truck at the end of it. "We're not toting anything," the talker called back over his shoulder.

"Not yet," Kerr muttered.

He wasn't some pointless goon. He was a highly trained, highly useful sexual submissive and house servant. Soon he would find a place with whomever the fuck the asshole prick that never made love to him anyway, dickhead, had sold his papers to, and then this mouth breather would do what Kerr said.

The goon opened the back door and just stood there, watching him putting his things in. "You're riding back there, too."

"Thank you so much." He rolled his eyes, pushed his hair behind his ears, and climbed in, telling himself that he wasn't hurt, that he was nothing but property, that he shouldn't cry. One day, that might even work.

The door closed with a loud clang, leaving him in the dark, the engine starting up moments later. The truck lurched forward, sending him falling onto his ass.

He did cry then, silently, heartbroken. He'd lost his home, his job, his master, and no one had so much as warned him. Someone had written up that paperwork, someone had made the arrangements, and someone had thrown him away.

He couldn't believe Horatio had done this to him, and without any warning at all, not a word to him.

The truck stopped abruptly, the brakes squeaking loudly. The door opened again, the dull grey sky seeming bright after the darkness of the truck.

Two little slaves popped up into the back and began grabbing his stuff.

He lifted his chin and firmed his lips. He was well trained, valuable. Special in his own right. Men begged to be wealthy enough to own him.

"Come, come," murmured one boy, motioning for him to get down from the truck and follow. He couldn't see the two goons. "You're going to be in the salle, honored one. Your groom is Ceris, and he is the Salle Master."

Finally, someone realized how important he was, what his stature was, even if he was a slave. He followed the lad through a side door and along a winding hall of stone. This place was much brighter than his mast -- than his former master's, more marble than rock on the columns and floors, white and light blue shot through with silver and gold.

When they arrived at the harem, the whole place still felt luxurious and gilded, as if the master lived back here as well as the front of the house. Well, his new master was very rich, there was no denying that.

A huge bald man stood as he walked in, bowing to him solemnly. "Honored one. I am Ceris, your groom. Boy, put the things in the gold room, then call for tea."

The lad who'd guided him here bowed and went running with Kerr's things, deeper into the harem.

"Welcome to Lord Belial's harem. We were very excited to learn he won you and that you would be joining us."

Lord Belial? Bel? Horatio had sold him to his best friend? Seriously?

"Thank you for your welcome." He bowed automatically, his training taking over immediately.

"Tea is coming. After that, I imagine you'd like a bath. Perhaps something light to eat."

Ceris was a handsome demon. The bald head exposed the little horns completely, and they glowed in the light. His bare chest was beautifully muscled, the gauzy pants exposing strong legs and hinting at a heavy cock. There was a heavy spiky gold tattoo covering Ceris' ridged belly, marking him as Master Bel's, Kerr was sure. Marked, but lovely.

"I... Yes, of course." He was developing the world's worst headache.

A lad, different than the first two, he thought, came in with a tray holding a teapot and two teacups. He left them on a low table, bowed deeply.

The boy did, hurrying off like he had somewhere to be.

"Please. Sit." Ceris waved toward the benches that surrounded the table.

"Thank you, Ceris." He and Ceris were equals, and he refused to treat the man with less respect than he deserved. "I was not aware I was to be transferred. Not until the papers arrived at the door."

"That's unfortunate. Were you able to collect all your things?" Ceris asked, pouring out the tea.

"I brought the things that were special that I could carry. What will my duties be here? In my former home, I acted as valet and head of household -- finances, staff management, that sort of thing."

Ceris shot him a confused look. "I was led to believe you were a trained submissive, honored one."

"Yes, I was. My former master chose not to use me in that regard." Not for many years and not often when he had.

"Perhaps that's why he wagered you in the game of chance he played with our master last night." Ceris leaned forward and spoke quietly, confidentially. "He's still here, sleeping it off. It got very loud and much was imbibed. I'm very sorry for the way it happened, but maybe it's for the better. There is no where else in all of Hell that I would rather be."

"I will thrive wherever they wish me to be." He hoped. He had no choice.

Ceris looked him up and down, gaze almost like a physical touch. "I'm sure you will."