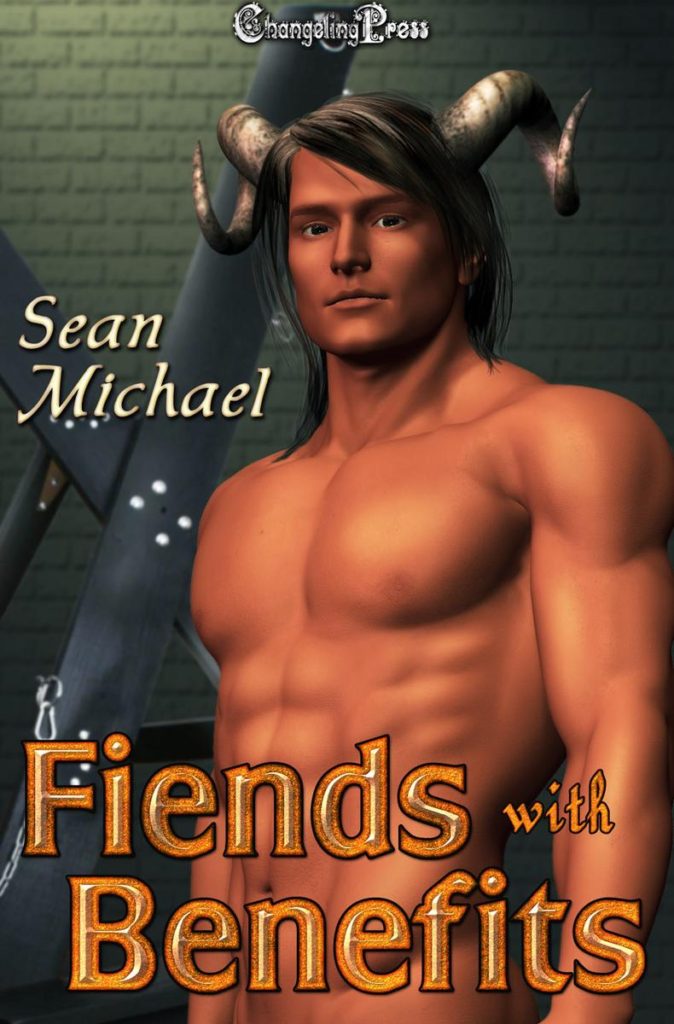 Desperate to save Standish, his dying lover, Ben summons a demon. When the summoning works, no one is more surprised than Ben himself.

Zazzul is a thousands-of-years-old demon who practices sex magic. He wasn't too impressed about being summoned on his birthday, but once he meets Ben and Standish, he's willing to heal Standish -- as long as Ben agrees to his conditions, of course.

Can Zazzul really heal Standish? And if he does, what will the ramifications be?

"You did what?" Standish leaned forward from the piles of pillows propping him up, staring at Ben with wide eyes, the lovely orbs sunken in Standish's once lovely but now drawn face. "Are you stupid?"

"Probably. On the other hand, it didn't work, did it?" He hadn't expected a demon to actually show up. What he'd expect was for Standish to be amused, distracted, maybe a little pleased with Ben's willingness to sell his mortal soul for Standish's good health.

Instead, his husband looked more than a little pissed off.

"But it could have! You can't mess with that shit, Ben. Demons play by their own rules. What if it had shown up and dragged you back to hell? Or dragged me there?" Standish asked. He looked like he thought it was a possible outcome of Ben's actions.

Stand blinked at him and collapsed back against his pillows. "Then why did you summon one?"

Before he could answer, a deep, loud voice boomed from the living room.

"I, the great and terrible Zazzul, have been summoned. What is your -- what the fuck? Are you invisible?"

Standish stared at Ben, and he stared back at his lover.

"Oh, fuck." Ben couldn't believe he'd actually summoned a demon. This was the last thing he'd expected to have happen.

"Call 911 and say what? There's a demon in our living room, send backup?" He was feeling a little hysterical and was thinking maybe that wasn't the worst option in the world.

"Hello?" There was a roar. "I had a perfectly good glass of whiskey and a nice fire going. Where the fuck are you?"

"Lock the door, honey. Now. Maybe call a priest." Standish didn't look that worried, but then his lover didn't have the energy to be more than mildly concerned.

"Must have changed your fucking mind." The voice turned into muttering.

Ben made his way to the bedroom door, but before he could close and lock it, the door flung open, the most incredible... demon standing in the doorway. He was tall and broad, his muscled chest bare, his eight pack ending where a pair of low-slung pants sat, clinging to muscled thighs and what was clearly a sizeable cock. The demon did have horns, and a tail that was swishing back and forth behind him, but no cloven hooves. Dark eyes stared at him, the demon's nostrils flaring.

"You realize I can't go until you send me back." That voice was thick, growly, scraping across his nerves.

The apparition in the door growled softly.

"Are you sure?" Standish was already half asleep, though, his eyelids drooping heavily.

"Are we going somewhere?" the demon asked.

"Living room. We need to talk." If by talk, he meant send Mr. Demon back home.

The big guy followed him back into the living room, where he discovered his chalk circle was already broken. It looked like that was his footprint on it -- he must have done it when he'd gone back into the bedroom. At that point he'd figured it hadn't worked, and he'd no longer been concerned about the necessity of keeping the circle intact.

"So." The demon cleared his throat. "I, the great and terrible Zazzul, have been summoned. What is your bidding, oh human master?"

Ben opened his mouth to send the great and terrible Zazzul back where he'd come from, but without him making a conscious decision about it, the truth shot out. "My lover's dying. I want him better. I really do. Badly." Summoning-a-demon-even-though-he-didn't-believe-in-them badly.

Zazzul sighed. "I can't change fate." Then he grinned, the look absolutely wicked. "Not on my own, anyway."

"What does that mean?" Ben was suspicious. Zazzul was a demon, after all, and so that meant trickery and trying to cheat him. He'd seen enough horror movies to know how this worked.

"You heard of sex magic, kid?" The black eyes were shining, almost twinkling at him as the demon leered.