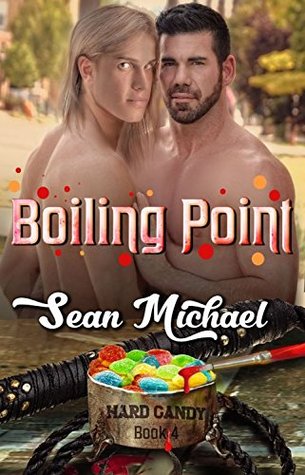 Now that they've met, will Drake and Jeren prove Denny and Cain right? And could they burn hotter for each other than even their friends know?

Publisher's Note: This is a revised and updated version of a previously released title.

"So you're a graphic artist as well, Jeren?" Now that he'd made good inroads on Denny's amazing steak, Drake could make conversation.

"Yeah. I don't do superheroes. I do horror."

Drake smiled. "You guys have a mutual admiration society going."

Jeren shrugged and hid behind his hair, but Cain beamed. "I couldn't believe he'd actually talk to me."

"It's always a boost when someone you admire loves your work, too, hmmm?" Cain was cute, but it was Jeren who held Drake's interest.

Cain nodded and smiled. "His stuff is...I've never been that dark."

Drake kept his lips from twitching. "Where does the darkness come from, Jeren?"

Jeren shrugged again. "It's just me."

"If you were mine, that hair would at the very least be tied back away from your face so you couldn't hide from me like that."

Jeren blinked over at him. "What?"

"You heard me." Now that he had it, he held Jeren's gaze.

"I'm not fucking Cain." Jeren looked at Cain. "No offense, man. You know I think you rock."

Drake nodded. "No, you're not Cain. You’re much more hard core than Cain."

Jeren snorted softly. "Well, I'm not yours. I don't belong to anybody."

"You need to." It was a challenge, and Drake knew it. He meant it, too. Jeren needed a keeper in the worst way.

"Bullshit." Jeren stood up. "Thanks for the steak, Den. I'm going to check those panels one more time before I go."

He wasn't going to let Jeren just leave like that. "I bet you run away a lot."

"I do what I have to." God, that rage and hunger were fascinating. He was going to have to pick up Jeren's comics, get a better insight into the man.

"And right now that's run away." Time to up the ante a little. "Am I really that threatening?"

Jeren stared at him but didn't say a word. The moment between them spread out and out, then ended with Jeren turning, leaving without anything else.

He turned to Cain, raised an eyebrow.

"I'm sorry. He's not a bad guy. He's just... It's hard, working in your head all the time, and there was a big deadline and he hasn't slept in days. Let me talk to him."

Drake patted Cain's hand. The last thing Jeren really needed was Cain being sweet and nice to him.

"You stay with Denny and talk about shaving something. I'll go."

"Come sit with me, darlin'." Denny knew how to take care of Cain. The two of them would be lost in each other in seconds. That was a given.

Drake chuckled and headed down the hall. He found Jeren in the studio, hanging half out the window, smoking, flipping through papers. Drake leaned against the door, watching. There was a bare tremble in the long fingers, the eyes suspiciously bright.

"You're holding on by a thread."

"I don't know, Jeren. Before supper, I'd have said a nice steak, some good dessert. Now, I'm not so sure."

"Cain bought cake. Go on and enjoy it."

"Only if you come back with me."

"I have to finish my cigarette, look at these panels. Then I can."

He went over and took the panels from Jeren's fingers, looked through them. Dark, violent, intensely sexual—this wasn't Cain's work.

"You have a very different style."

"I do." Jeren took a long drag from his smoke.

"Filthy habit." He nodded to the cigarette.

"That's what my mother told me." A long stream of smoke shot out the window.

"She's right." He took the panels and put them on the table. "Put that out and come back to the table."

Jeren sighed, took a long, long drag then stubbed the cherry out on the bottom of his shoe.

Drake followed Jeren back to the kitchen, groaning under his breath as he saw Denny and Cain feeding each other cake. "I'm going to go into sugar shock."

"Just ignore them. They're stupid in love." Jeren headed for the coffee pot, poured himself a huge mug.

"I'll have one of those." Stupid in love; a good description. It was cute when it wasn't nauseating.

Jeren nodded, poured him a mug, and brought it over.

"Thanks." Their fingers touched when he took the cup, a spark of static zapping him.

Jeren's eyes met his, tongue flicking out to wet those lips. He thought the glasses made Jeren's eyes seem even bigger in his face. Drake held Jeren's gaze, the spark not nearly as strong as the metaphorical one that passed between them.

The man would be an enormous challenge, but Drake could take him on.

The gaze, the silence, the connection—it went on and on. He didn't turn away; this was far more telling than anything else.

"Sit and have dessert. Your friend bought it with you in mind." Drake didn't know that for sure, but he knew what kind of man Cain was, had seen how much the sweet sub admired Jeren.

"Just one piece and I'll send the rest home with you." Cain smiled at Jeren, hopped up, and cut two slabs of chocolate cake.

"I... One piece." Jeren chuckled softly, giving Cain what could only be called a fond look.

Drake waited until Jeren had sat, then took the chair next to him, grabbing a fork. Denny gave him a knowing look, which he pretended not to see.

Jeren was left-handed, and the man smelled like Ivory soap and ink and tobacco. Drake wanted to strip him down and explore the lean lines, see what scents he could pick up beneath the soap.

The icing was carefully peeled off, set aside, then the layers of the cake separated. Drake watched, fascinated by the almost OCD process.

Jeren ate a bite of the cake, nodded. "It's good, thanks."

"Are you saving the frosting for last?" He had to know.

He'd bet there wasn't much Jeren did like everyone else, though. Grinning, Drake dug into his own dessert.