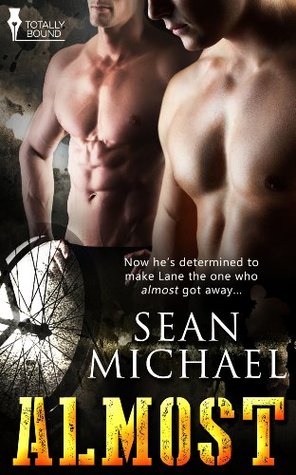 Hammer let Lane drive him away, but now he’s determined to make Lane the one who almost got away.

Lane lost his legs while saving his unit overseas. It’s been two years and he’s doing his best to come to terms with things, including the fact that he dumped his lover to free the man up from being stuck with a gimp for the rest of his life. Luckily, Lane inherited his Gramps’ cottage—it just needs some renovations to make it wheelchair friendly. He’s determined to make the best of what he’s got.

Hammer was one of the men Lane saved…and his lover while they were in the Army together. He let Lane drive him away back when the man first got hurt, but now he’s hunting Lane, determined to make Lane the one who almost got away. Will Lane be able to see past his injuries far enough to realise Hammer’s in it for the long haul?

Publisher's Note: This story has been previously released as part of the Stand to Attention anthology by Totally Bound Publishing.

Lane got himself into his wheelchair, rolled himself to the back porch and started doing pull-ups. His eyes were on the lake, on the water right outside his porch as he worked his arms, his abs. He’d spent his whole fucking childhood in this lake house, fishing with his gramps, swimming, goofing off. He loved this place and now Gramps was gone and it was his to do what he wanted with.

Hell of a trade for a pair of legs.

Up. Down. Up. Down. Eyes on the water. Don’t think about sand, bombs, enemy fire. Just the lake. The water. The burn in his arms.

The snap of a twig sounded like a shot.

He stopped, frowning. It was late winter. People didn’t come out here in the winter and he hadn’t found himself a dog yet. “I have a .38 and I know how to use it.”

“I sure as hell hope so. It wasn’t your head you injured.”

Lane lowered himself down onto his chair. No. No way. He hadn’t talked to Hammer in almost two years. Hadn’t seen him in longer than that.

The owner of the voice appeared beside his deck from the side of the house. Tall, stacked, haircut high and tight over a strong, square jaw and mismatched eyes. He’d only ever met one man with one hazel eye and one green, and that was Hammer.

Lane immediately, instinctively rubbed his shaggy beard that hid the scars on his face. “You lost, Sarge?”

“I was thinking I might be, then I turned a corner and found you, so no, I’m not lost.” Hammer wore a pair of jeans, a T-shirt with a leather jacket over it and had his bag slung over his shoulder. Fuck, he looked good.

Lane was in nothing but a pair of sweats, the sweat cooling on his bare chest making him shiver. “You want a cup of coffee?”

“Yeah. Yeah, sure. Come on.” He wheeled himself into the kitchen, which was in the middle of a remodel, and grabbed the coffeepot. “Excuse the chaos. I’m working on the place.”

Hammer followed him in, work boots ringing on the deck. “You doing it yourself?”

“Yeah. Gramps left it to me. I’m staying here full-time now. Fixing it up.” Making it as accessible as he could.

Hammer looked around but didn’t say anything, his face unreadable. Finally those mismatched eyes met his again. “I’m sorry about your Gramps.”

“Thank you. He liked you a lot.” He wheeled over to the sink, filled the coffeepot.

“He was a good man.” Hammer unshouldered his bag and left it by the door, out of the way.