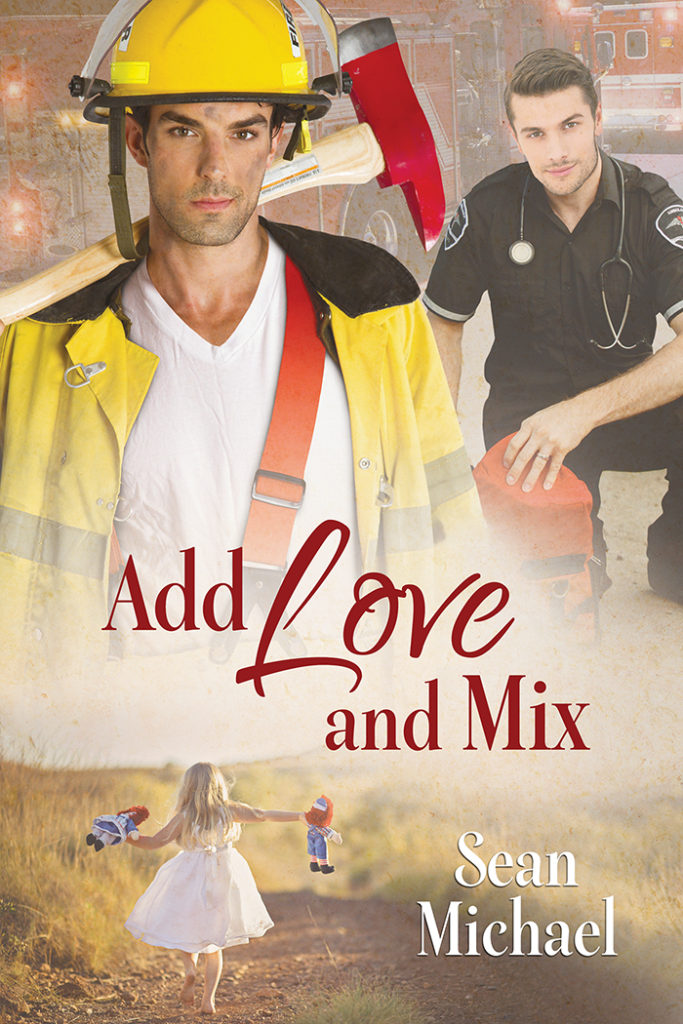 Firefighter Jason “Jase” Weller and EMT Scott Bronson are living the perfect life. They work together in jobs they love, they live together, and in their downtime, they still can’t get enough of each other. It’s been six amazing years. Then on Christmas Eve, Jase’s former lover Elsa shows up with a six-year-old girl in tow. The strung-out junkie claims Kerry is Jase’s daughter and it’s his turn to care for her, and then she walks out.

Shocked at both the fact that Elsa is now a junkie and that he has a daughter he never knew about, Jase nonetheless steps up to the plate as her father and Scott offers his full support. Having an instant family comes with plenty of challenges, and the two men work to deal with sweeping changes in their lives and to make things right for Kerry.

It’s not going to be easy, and their new circumstances test them and their relationship like nothing ever has. They’ll need all the love they have for each other—and the love they discover for their daughter—to keep from breaking apart.

JASE WHISTLED as he drove the truck back to the firehouse. He was pumped like he always was after a call.

The snow was falling thick and white, coating Ottawa in Christmas cheer.

He almost always worked Christmas Eve, but this was the first time he could remember it actually snowing. Looked like it was going to be a big storm too before it was over.

He pulled into the house and parked the big rig, grinning as the ambulance pulled up next to him.

It had been a good call. Small fire, no injuries, and they’d dealt with it in record time.

Jase climbed out and joined the other guys in making sure everything was ready for their next call, then lingered, letting the other guys hit the showers first.

He headed over to the ambulance, finding Scott on his own, restocking.

“Hey, gorgeous.” Scott grinned at him, green eyes warm and sparkling under the crazy mop of black curls.

God, he was in love with this man. Still. Time and proximity only seemed to deepen the way he felt.

“You almost done there? I bet the showers are deserted at this point.” There was a reason they both took their time when they got back to the house.

“Perv.” Oh, that was a naughty smile.

“Takes one to know one.”

Jase stepped up into Scott’s space, looking into the green eyes, the heat he was feeling matched there.

“Don’t you mean catch us again?” Jase laughed and rubbed Scott’s crotch. “They’ll give us some privacy, long as we’re quick.” And he knew they could be quick. Hell, they were both so ramped up from the call, they’d be going off like rockets.

“Of my ass?” Eager and randy, Jase shook it as he headed into the station proper.

The place was decorated for Christmas: lights twinkling, the tree fully decorated, everything shiny.

There were even gifts under the tree. The guys who worked over Christmas did a white elephant game. He had his real gift for Scott under his bed.

The showers were empty, and he went to the far one, turning it on hot before stripping.

Barely three minutes passed before warm hands wrapped around his waist, the touch sure, wanton.

Jase leaned back against Scott’s solid body and groaned. “Hey, babe.” Resting his head on Scott’s shoulder, he kissed his lover’s neck.

“Hey,” Scott said. “You ready for our vacation to start? I sure as fuck am.”

“Yeah. Boxing Day here we come. You think next year we should take the holiday off?” They worked because they didn’t have families, but they had each other.

“Eh. Maybe. I like to save it for the guys with kids.”

He laughed, turning to grab Scott and push him up against the tile. Then he took the kiss he wanted, diving into Scott’s mouth.

Scott climbed up his body, legs coming to rest around his waist.

Jase humped against Scott, their bodies slamming up against the tile.

Their cocks rubbed together, the sensation fucking amazing.

They didn’t have time to goof around, to take their time. They simply had to get to it.

Biting at Scott’s lips, Jase moved faster, moaning when Scott’s hand wrapped around both their cocks.

Groaning, Jase closed his eyes, feeling the pleasure course through him.

“So easy.” Scott was such a tease.

There wasn’t any heat behind the word, though. Nor any strength, his body entirely focused on how good everything felt.

“Uh. Uh-huh. Yours.” Scott tugged the tips of their cocks good and hard.

“Fuck!” Jase jerked, bucking their bodies hard against the wall, and came, spunk spewing up over Scott’s hand.

Scott watched through his orgasm, then began jacking them both good and hard.

Still, he didn’t ask Scott to stop, did he? No, he leaned one hand against the tile and, pushing the other between them, tweaked Scott’s right nipple—the more sensitive of the two.

Jase twisted the nub harder this time, digging his fingernails into Scott’s flesh. “Come on. Give it up for me.”

Scott shot like a hose, spunk pouring out of him in long pulses.

“Fucking love that smell.” To Jase it meant safety and sex and love and happiness.

Grinning, he took another kiss, lips lingering lazily against Scott’s. He knew they had to rinse off and get out before they got walked in on, but he wanted another moment with his lover.

“Yeah. All that matters is that we’re here together, and it’s a good one.”

Jase gave Scott one last kiss and stepped back. He slid his hands to Scott’s ass, holding on until Scott had his feet back on the ground.

Grabbing the soap, Jase made short work of soaping up his lover’s skin, touching more thoroughly than he probably needed to.

Scott helped out, and they managed to get out of the shower and into towels before Andy came through, rolling his eyes.

“Jase, man, you got someone at the front asking for you.”

“Seriously?” Practical jokes abounded at the firehouse. Especially when they were working holiday shifts.

“No, I’m making it up. Yes, seriously.” Andy rolled his eyes again, and Scott laughed, snapping his ass with a towel.

Jase sent a mock glare at both of them and pulled on his jeans and a T-shirt before heading out to the front.

He blinked at the woman standing in the lobby. She looked like shit—strung out and hollow cheeked, hair stringy and ragged.

“What? You don’t remember me? We slept together for six months, you pig.”

He shook his head. He didn’t know any crackheads. The only woman he’d slept with for six months was just before he’d met Scott. He and Elsa had broken up over six years ago.

He met her eyes, ready to tell her he wasn’t who she was looking for, when he saw a flash of Elsa in the sunken eyes.

“You do remember. Excellent. I got something that’s yours, and I don’t want the little bitch no more.”

With that, she shoved a skinny, filthy little girl with tears streaking her cheeks and a huge bruise on her tiny face toward him.

“Shut up. This fucker is your dad. You’re his problem now.”

The girl started crying outright, and Elsa went to backhand her, but Jase stepped in between the two of them, hand on the little girl’s shoulder as she began to wail louder. “Hey! What the hell happened to you? And what are you talking about, I’m her dad?”

This was not the woman he’d known. And they’d always been careful. He knew they had.

Aside from condoms, she’d been on the pill.

“You left, and I found out about the little bitch three weeks later. Tried everything to get rid of it, but it lived.”

“Hey there, sweetie.” Scott’s voice was soft, gentle. “Would you like to see my ambulance? Maybe have a Coke?”

Jase turned and nodded to Scott, mouthed, “Thanks,” then shifted his attention back to Elsa.

“Why didn’t you call me?” He would have helped. Gotten her and the baby the proper care. Hell, helped pay for the abortion if Elsa was determined to go through with it. “And when did you get hooked?”

“Fuck you. I was using when I was with you. Why do you think I had to start selling shit? You weren’t ever there. I needed something.”

“Jesus, Elsa….” He didn’t know what to say. He totally didn’t recognize this awful bitch in front of him. Either physically or mentally. “I’m sorry. You need some help getting clean?”

“Fuck you. I’m out of here.” She tossed a tiny backpack at him. “I tried to sell her. No one wants her. She’s worthless.”

That shock began to turn to anger as Elsa turned on her heel and marched out.

He went to go after her, but Andy grabbed his arm, held him back.

“Don’t, man. That kid is better off pretty much anywhere else.”

Jase was nearly shaking, his emotions a jumble.

“Why don’t you go find Scott and see how she’s doing?” Andy suggested.

He headed out to the bay where the ambulance was parked.

“Do you like the red ones? I do. Lots.” Scott was talking, chattering away, and the little girl’s tears had dried up.

“Hey, there,” he said quietly. Shit, Elsa hadn’t even told him her name.

Scott and the little girl both looked up, and Jase crouched so he wasn’t so tall. “What’s your name, honey?”

Jase blinked. That had been his twin sister’s name. She’d died when they were six. A boating accident. “That’s a beautiful name. I had a twin sister named Karissa.”

He saw Scott looking at him in surprise.

Jase didn’t talk about her very much, but it seemed appropriate, what with the little girl in front of him.

“Mommy told me. She drownded, and she’s a ghost that pinches bad girls.”

“What? No. No.” Jase put his hand on her back. “She was a wonderful little girl, and she would never pinch anyone.” Maybe him, when they were bickering, but usually only in retaliation. “She’s my guardian angel, and I bet she’s looking out for you too.”

“Are you really my daddy?”

He looked at Scott. What did he tell her?

She was the right age for it to be a distinct possibility. And Elsa had named her after his sister.

But would it be fair to say yes and have it turn out later that she wasn’t?

He looked from Scott to her, and she stared back, giving him his first look at her big blue eyes. Christ, he saw those eyes in the mirror every morning, and he’d seen them every time he’d looked at his twin sister too.

“Yeah, Kerry,” he told her, his twin’s nickname falling off his tongue easy as anything. “I think I am.”