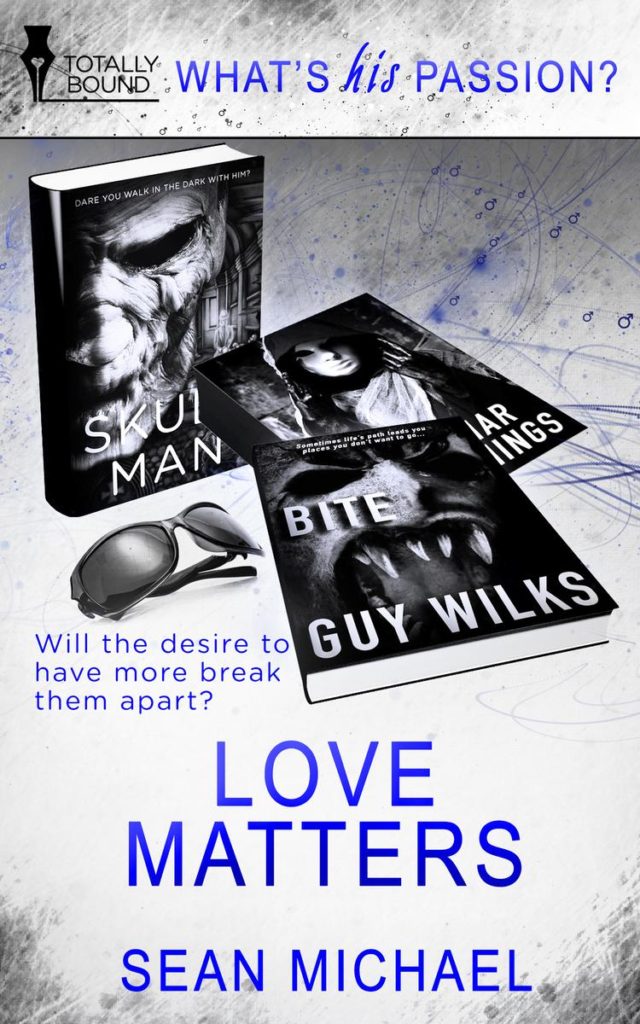 Part of the Matters series:

For ten years they’ve done things Trey’s way. Now Lucien wants more. He wants to be with his lover full-time. Is Trey ready? Will he ever be?

Ten years after they first met and fell in love, Lucien and Trey are still together—after a fashion. Terrified that he’s going to become entirely dependent on Lucien, Trey calls his lover to come spend four to five days with him whenever he finishes a novel. Lucien wants more, but up until now has been willing to bow to Trey’s wishes.

Finally broaching the idea of seeing each other more often, during Trey’s writing periods, Lucien suggests that they begin to date each other on Friday nights. Trey agrees to the experiment and begins to flourish as Lucien gets him out of the house more—to eat, to swim, to visit the beach.

But can Trey remain faithful to his work ethic, get the job done with his novels and enjoy the distractions and adventures Lucien plans for him? Or will Lucien’s desire to have more break them apart?

Only time will tell.

Trey finished the edits on his latest novel and leaned back, head pounding. Lord, that one had been a bear. Nearly six months he’d been fighting this novel and he was finally going to send it off. Hallelujah.

“Brian, are you out there?” He waited for the sound of his assistant’s steps on the tile.

“Right here, boss. What do you need?”

“The edits are done. They’ll go to Andrea. I need to make sure that the new headset I ordered will be here Monday. I need my phone and a cup of coffee with cream and then you can have the rest of the week off.”

Trey nodded, smiled. “Oh, can you please make sure that Dodger’s food is on the counter where I can get it, too?” It wouldn’t do to let his guide dog and best friend on four legs go hungry because he couldn’t find the kibble.

“Sure, boss. Do you need me to get you some supper?”

“No, I’m going to call a friend.” He’d finished another book. He and Lucien had a standing appointment and this time, he not only wanted what the man offered, he needed it. He’d wait for Brian to leave, though. This was not a conversation to be had where he could be overheard.

Relaxing, he asked his computer to turn on his music. Bach poured over him, rich and heavy, and he nodded along, humming. He couldn’t wait to make that call, to hear Lucien’s gruff voice. To feel… His cock filled, swelled and he wiggled on his chair. Keep it together, man.

The sound of Brian’s footsteps on the tile coming closer helped him get his erection under control. The last thing he wanted to do was embarrass his assistant—or himself, for that matter.

“I have your coffee and your phone.”

He heard Brian set them on his desk.

“The coffee is at two o’clock, half a foot from the edge of the desk. The phone is at nine o’clock. And your headset will be here Monday before noon. Are you sure there isn’t anything else you want me to do?”

“No. No, I’m good. I’m planning on staying in this weekend. I have enough dog food, yeah?” Not that Lucien wouldn’t go get him some if he didn’t, but he’d rather spend his time with Lucien doing other things. Any shopping they did would not be for dog food or anything else as mundane as that.

“No. No, he’ll use the doggie door. We’ve got this down. I’ll see you Monday at ten, hmm?” It was all he could do not to shoo Brian out of the door.

“You too, man.” Trey sat back, waiting for the sound of the front door locking, followed by the odd high-pitched whine of Brian’s moped motor.

As soon as the buzz from the moped disappeared, he grabbed his phone. “Call Lucien.”

The phone rang only once before it was answered. “Trey.”

“I need you. It’s in—Darkness. I have until Monday morning.” Five days. No working, no words fighting him, just him and Lucien. For five days. It bore repetition.

“I’ll be there in twenty. And boy, you’d better have a plug in when I get there.”

The only question was, did he put in the plug or not, and if he did, which one? Whatever he decided would set the tone for the next five days. If he didn’t, it would be punishments and torture. If he used the large one then he would get pampered. If he used a small plug…

Trey headed out of his office, down the hall and into the kitchen. He knew his home by heart and could walk around without worrying about trying to orient himself or figure out where he was—or bumping into anything. Brian knew full well to keep everything exactly where it was.

In the kitchen, he poured himself a glass of water and fed Dodger, the sound of those click-clack claws on the tile as Dodger came in, responding to the sound of the kibble hitting the bowl, making him laugh. “Hey, boy. Your favorite person is coming over.”

Dodger barked twice for Trey, as if he understood. He had no doubt that Dodger did.

“I know! We haven’t seen him in months.” They had an arrangement. Trey needed peace to write, needed complete order and control of his life, and Lucien… Well, Lucien stole that from him. So every time a novel was done, Trey indulged. It wasn’t perfect, but it worked for them.

And if he didn’t want a long weekend of punishments, he’d better get that plug in. The thought gave him a jolt of excitement. Lucien was magical, making him feel so much, getting him out of his head and fulfilling all his needs. He wasn’t sure anymore how he’d managed before Lucien had come into his life.

Trey checked the time, pressing the button on his watch and listening to the readout. He still had ten minutes before Lucien would be here—and he knew Lucien well enough to know that the door would open at precisely twenty minutes from the end of their call. That gave him enough time to brush his teeth, maybe even get himself off.

He headed to the bathroom, stopping to turn the music to low. He washed his face, ran the electric shaver over his cheeks, brushed his teeth, then he searched in the bottom drawer of the vanity. There were three plugs there—one that was the size of a cock, one the size of a finger and the third… That was the one Lucien called the punishment plug. That was for emergencies—like when Lucien couldn’t come over because he was out of town on business. Then there was the phone and that thick plug and tears and his own hand. Though to be fair, that had only happened once. Still, it had been one time too many.

Tonight Lucien would bring his own treats.

Trey took out the thin plug and headed toward the bedroom. Lucien had his own key and would be expecting Trey to be in the bedroom, naked, plugged and waiting. It made him feel naughty in the best possible way.

He undressed, before folding his clothes neatly and setting them on the dresser, then he slid under the covers, tracing the smooth plastic of the plug, testing the give. He slipped it into himself with the barest minimum of lube—hell, he barely felt it, but the act of sliding it in his needy hole gave him goosebumps. It was a promise of things to come.

Trey had barely seated the plug when Dodger barked, his claws noisy on the tile as he raced to the front door.

Trey curled up under the covers, focusing on the sound of Lucien’s heavy steps on the floor. He heard Lucien giving Dodger his due first, loving on his mutt. Oh, go, Lucien—he had found the kick spot and it sounded as if Dodger was trying to dig a hole to China.

Lucien laughed. “Okay, boy. I need to find your Master. See what kind of weekend we’re going to have.”

God, Trey loved that sound. Lucien’s laugh was full-bodied, rich, happy—like the deep voice that made his cock jerk, filling.

There was a last bark from Dodger, then Lucien’s footsteps heading to the bathroom. The tap ran for a few moments, and he knew that Lucien would be washing his hands. Then, finally, the footsteps headed straight for him.

Trey smiled, inhaling the delicious scent of wood smoke and spice and wind.

“Someone is hiding under the covers. Would you like the room warmed?” Lucien’s rich voice poured over him like honey.

“Good evening, Sir. I felt odd, spread out and naked.”

“That’s how I like you, though. A feast, just waiting for me.”

Trey could hear the subtle sound of buttons sliding through their holes, and he sat up, desperate to see, to touch.

Lucien always had had the ability to seem to be able to read his mind—or read him, at least. Was it easier if you could see? He thought it probably was.

Trey explored the blanket’s edge, the puckering where the stitches were—anything to keep himself busy, to keep his hands from running over his own body, wrapping around his cock. God, the waiting was torture.

He could hear each step as Lucien undressed—Lucien’s shirt shushing as it slithered from Lucien’s shoulders, the zipper of Lucien’s pants slowly being drawn down.

The scent of his lover grew stronger, too, like the best kind of perfume on the air. He swore he could tell when Lucien’s boxers were pushed down, too, the thick cock springing out.

“You’re naked now.” And he wanted to touch.