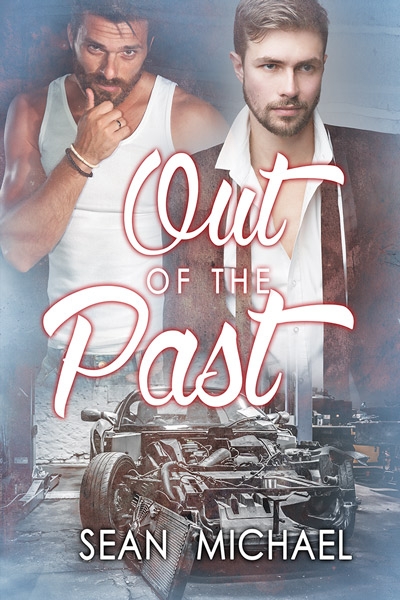 Ten years after a terrible car accident left carpenter Andy Johnson dead, Steven Billings has yet to move on. Though he’s put aside his art to run his family's foundation—just like his parents always wanted—Steven has never been able to put Andy and the love they shared behind him.

Except Andy’s not dead. And after a long, agonizing recovery—alone—Andy has come to hate Steven, believing Steven abandoned him when things got tough. When a chance encounter at a bar throws them back together again, it’s like the dead have come back to life and the past has come back to haunt them both.

STEVEN WALKED into the Blue Saloon and looked around.

It looked like a pub, not a nightclub or a Roman bath: wood flooring, brick walls, a long bar, beer on tap, and classic rock playing on the sound system. He snorted to himself as he headed to the bar and grabbed a stool. When had he become old enough that the good music was called classic?

Not his usual watering hole, the Blue Saloon felt comfortable, and the admiring looks thrown his way didn’t hurt. The bartender was busy at the other end of the bar, which was fine; it gave him a chance to do some admiring of his own. Like the man a few stools down. Now there was someone just his type: short, built, glasses. Steven didn’t always go for the full bearded and mustachioed, but he didn’t dislike facial hair.

The man looked over at him once, then twice, then again, almost like they’d met. Then the man looked back into his beer glass, shoulders hunched a little.

“I’ve been accused of it a time or two. Yeah.” Rough voice—husky, deep, it sent shivers down his spine.

Oh God, he could listen to that voice read a phone book. “Well, I can work with shy. Can I buy you a drink?”

Those blue eyes met his, looking completely shocked and surprised. “Me? You want to buy me a drink?”

Steven chuckled. “Is that so surprising?” There was something about this guy… more than just being his type.

“It is?” He had to wonder if this guy didn’t want to get picked up, or if he wasn’t the guy’s type. He took another look. God, there was something so familiar…. “Have we met?”

Those amazing eyes went wide, and then the guy took a deep breath. “What’re you drinkin’?”

Oh, maybe he was one of those guys who liked to do the buying. Steven could work with that too. “Well, I usually have a martini….” This wasn’t really a martini type place, though.

“Okay. Jack, get the man a dirty martini and give me a double shot of JD.” He passed a twenty to the bartender with scarred, wrinkled hands.

Steven touched one hand, sliding his fingertips over the marked skin. Fascinating. “Thank you.”

The guy went still, took a breath. “Not a problem. I haven’t seen you in here before.”

“It’s my first time here. It’s nice and warm, friendly.” He smiled and took a sip of the martini that had been put down in front of him. “You knew the bartender’s name, so I assume you’re a regular?”

“You seem so familiar. Are you sure we haven’t met?”

“Well, man. If we had and you didn’t remember me, that would suck.”

“It would. I can’t imagine forgetting you.” Still, those eyes were so familiar it almost hurt.

“Yeah. Well. What brought you into this place tonight?” Those scarred hands smoothed down the tight T-shirt, the motion sexy as fuck.

“Maybe it was fate,” Steven murmured, flirting like crazy and taking another sip of his martini to keep from reaching out to touch the guy’s hard belly.

“I doubt it. You come in with someone?”

“What happened? He leave you?” Why did the guy sound so… tense?

“No.” He shook his head, the pain always surprising him with how it could be so immediate, even after all these years. He took a deep breath and let it go as best he could. “No, he died.”

“What? Hey, come on. I thought we were having a good time here.” He was attracted to this guy. Really.

“Penny, man. I’m not in the mood. I’m sorry you lost your feller, but, shit. You don’t remember my fucking name. I’m not having a good time.” The guy just walked away, grabbing a hat off the bar as he went.

The nickname sliced right through him. Penny. No one had called him that since… shit, that’s who this guy reminded him of.

He frowned and followed the guy out the door. “Hey. Hey, you.”

“Who put you up to this?” Someone had a very sick sense of humor.

“The looks, the nickname. Who the hell thought it would be funny? Because I don’t think it’s funny at all.” Steven wrapped his arms around himself, the evening suddenly seeming very cold after the warmth of the bar.

“Have you lost your mind?” Those amazing, fucking familiar eyes stared at him. “Are you fucking crazy?”

“Is that what this is about? Is someone trying to make me think I’m crazy?” He glared, the pleasant evening gone.

“Look, Penny. You walked into my bar, not the other way around. This is where I live, my place. You take your high-dollar life and go on, just like always.” The guy headed for a huge red pickup.

Oh, he didn’t think so. “Excuse me? You’re here pretending to be my dead lover, and I’m the one getting attitude?”

“Jesus, Steven. I mean, I know I wasn’t much to you, but we were together for almost a year. Was I that fucking forgettable?”

“No. I’m me. Go home, Penny. Quit slumming.” That little, compact body swung up into the truck. The engine roared to life.

That ass. Steven would know that ass anywhere.

“Andy….” He felt the blood drain out of his cheeks, and his knees gave out. He shook his head again. No. No, he’d buried Andy.

The truck left. Just drove off. Jesus. He stared for a long moment and then shook his head and made himself stand. No way. It wasn’t Andy. It couldn’t be.

He staggered back in and made his way to the bar, sitting heavily.

“Hey, man. How goes?” The bartender was wiping down the wood. “You okay?”

He shook his head. “No. No, I’m not. Give me a whiskey, neat.” He didn’t understand why anyone would play a joke like that. It was cruel.

“Sure. You and Andy get into a fight or something? He’s a good guy, but he’s a hard pickup.”

“Huh?” The bottle was held, half above the glass. “You might not need this.”

“Trust me, I fucking need it. And I want to know who put you up to this—did someone come in here and pay you to drop that name?” God, he was shaking.

“What name? Andy Johnson? He’s a regular; comes in every Tuesday and Friday for the last six years. Everybody knows him. Hell, he built half the guys in here’s houses.” The little guy didn’t look like he was lying.

Fuck, this was insane.

“Give me my fucking drink.” He pulled out his wallet, shaking more than ever as he pulled out a ten.

A big guy came in the door, sat down hard. “Man, Andy tore out of here. Is he okay?”

“Y… you know him too?” The evidence was starting to mount.

“Andy? Yeah. He’s a good guy. Quiet. Builds one hell of a house.” Rheumy eyes landed on him, curious. “Did y’all have a to-do?”

Steven shook his head and shot back the whiskey, concentrating on the burn. “I buried him nearly ten years ago.” Maybe he was losing his mind.

“Guy looks good for a corpse.”

“Just pour me the drink.” He wasn’t anywhere near drunk.

“Sure.” Jack poured him the drink and walked away, leaving the other men staring at him, looking confused.

“So, Andy. Andy Johnson. He’s an architect, then?” The bartender had said something about Andy making houses for half the people who frequented the bar…. Steven’s head spun.

“No. He went to school for it for a while, but he’s a builder. He was in a real bad accident a hundred years ago or something.”

Another big, gruff dude chuckled. “He’s all creaky in the cold.”

Steven’s head hurt. His stomach was in knots. “Ten years ago. It was ten years ago.” And he’d been told Andy was dead. He’d buried his lover, for Christ’s sake.

“Oh man. Did you know him before? He said he was real tore up.”

Steven nodded, and then suddenly he had to get out of there. He needed some air before he threw up.

Ten years. For ten years he’d thought the love of his life was dead. He threw some money on the bar and stumbled out into the chill night air. Jesus. Ten years. Ten years, and Andy’d landed not fifty miles from where there was a tombstone with his name on it.

He wanted to know what the hell had happened. Who’d stolen ten years of love from him?

Getting a hold of himself, he headed for his car, loaded for bear.