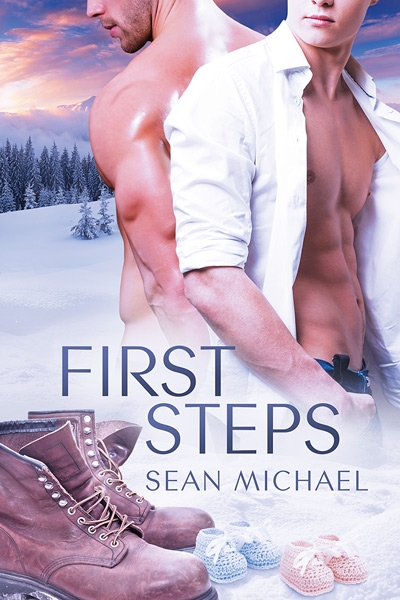 Abandoned by his partner in the wilds of Alaska, single gay dad Peter Boone is at the end of his rope. He has screaming twin babies to care for and far too much time without adult companionship. To make matters worse, Alaska’s harsh and gloomy winter is about to close in on him, his twins, and their small, rundown cabin.

Park Ranger Chad Bristow likes living alone in Alaska, but after visiting Peter to warn him about an encroaching forest fire, he starts to wonder what life would be like with someone like Peter. Winter’s severity worries Chad, and he believes Peter and his twins won’t make it, so he offers to take them into his home. Soon Chad realizes that the attraction he experienced for Peter on their first meeting has the potential to heat up beyond his being a good Samaritan. Now all he has to do is convince Peter that they can do more than just keep each other warm.

THE CABIN was quiet.

Well, quiet was one hell of a strong term, with Ellen screaming at the top of her lungs and Daniel sobbing hysterically while Peter fixed their bottles, but at least it wasn’t cars and trucks and fire engines and neighbors and stuff.

God, he was tired. Ginnie, his surrogate, had offered to terminate one, when they’d found out two were coming, but he’d wanted his babies, had paid her all his inheritance to carry them, wouldn’t give them up.

Still, he should have saved enough for a nanny.

He put the nipples on the bottles and went over to the crib where they were carrying on, fat little legs kicking furiously, hands reaching for him. The screaming stopped at the sight of the food.

He laughed, relaxing, enjoying the sudden silence, the look of pleasure in those pretty china-blue eyes.

“See, there? Daddy promised not to make you two starve.”

The trees cast huge shadows over the little yard into the huge bay window, and the sky looked fabulous—violets and pinks and blues. God, it was beautiful here. “Oh, sweets. I want to let you grow up somewhere like this. Somewhere green and alive and not concrete. Somewhere you can go outside.”

Peter had been in the mountains for three weeks, searching for something, someplace he and the babies could afford. His place in the city was tiny.

Not suitable for babies.

He chuckled at himself, picking Ellie up to burp because she always ate faster. Burke and Allan and the guys wouldn’t recognize him now—his hair was scraggly, he had on old jeans and a diaper on his shoulder, and he smelled like baby powder and….

God, he loved his babies.

More than fucking, more than parties, more than the city. Hell, more than writing, and that was saying something.

Allan had stopped by before they’d headed out, all concerned eyes and frowning and “are you sure about this weird baby thing, man.” They’d shared some hard words, harsh ones—Allan called him a sell-out, a breeder, and he’d told Allan that, at some point, life had to be about more than fucking someone, over or otherwise.

The fight had gotten louder and uglier, and then Ellen started fussing—sweet little love, so aware, so sensitive—and he’d been derailed, turning his back on his former fuckbuddy, going to get his daughter and his son.

Ellie burped about the time Daniel started wriggling, and he settled Ellen back in her crib before putting Danny over his knees.

Yeah, he needed to find somewhere for them, somewhere warm and safe. Somewhere where his sweets would remember making snowmen and picking flowers and playing.

He needed that for them, and damn it, he’d find it.

“Come on, Danny. Burp and we’ll all lie down together and rest.”

Ellen kicked, her movements setting the music off on her little mobile, her happy laugh filling the cabin.