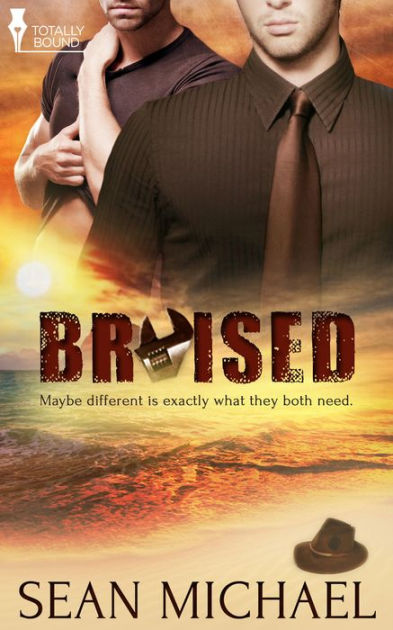 Part of the Bruised series:

Johnson and Billy come from different parts of the country, different backgrounds and different places in their lives. Maybe different is exactly what they both need.

Billy thinks Johnson’s the hottest ticket he’s seen since he moved to California from Texas, and after a good meal and some good fun, he takes Johnson home. They both find out they’re getting more than they bargained for. Can Johnson and Billy figure out why they feel so connected and can they make it last once reality sets back in?

Johnson glanced at the clock as he locked up the garage. Eight minutes past five. Not bad for a Saturday afternoon—the last-minute customers that usually made him late had been nonexistent today. Which was just as well—there was an early party at Dottie’s and a half dozen others he wanted to hit before morning. Make the rounds. He hadn’t done that in an age.

He was looking to get laid. Maybe more than once. It had been too long since he’d picked someone up and even longer since he’d had a steady. Tonight was his lucky night, he could feel it. Love was in the air. He started bopping around the place, cleaning up the office, putting away his tools as the theme song from The Love Boat played through his head. Grabbing a wrench, he stared singing loudly. “‘Love is in the air, everywhere I look around…’”

“Well… You’re not Garth Brooks, but I reckon you wouldn’t kill anybody with your voice,” a soft drawl sounded, echoing in the garage. “Is this a garage or a karaoke bar?”

Oh fuck—he hadn’t locked the door. Cheeks heating, Johnson turned to find a…cowboy, complete with black hat and fancy cowboy boots. Guy wasn’t bad-looking either, even if he was short. “Until five p.m. we’re a garage. After five, we’re a karaoke bar.”

“Oh, in that case, when does your bar change back? My Dodge needs rings, I think—it’s smoking something awful.” Bright blue eyes met his own, sparkling, making him smile back.

“I suppose you can drive her in, and I’ll take a look on Monday—we do some work on Sundays, but at this point we don’t take on new jobs before Monday. Will that suit?” He hated to leave people hanging, but he’d closed out the cash register and turned off the computer, and hell, it was close enough to five-thirty now that he wanted out so he could get his shower. The night was calling to him, and he didn’t want to miss yet another round of parties just to fix another vehicle. Even if said vehicle’s owner was hot.

“I suppose it will have to.” He got a nod, the black hat dipping. “I imagine y’all will call me with an estimate sometime Monday afternoon?”

He grinned. Fuck, but that accent was cute. “I imagine someone will. Probably even me.”

“Cool. She’s a sweet little dark blue Lariat. Eight cylinder. Two thousand and two. King cab. Let me get you my keys.” A set of truck keys were pulled out of one pocket, already separated from the others on the ring.

He took them, fingers stroking across the man’s palm. Oh, that almost gave him shivers. Fuck, he needed this party to turn up a take-home or two. Maybe even three, though really, he wasn’t greedy—one who could go for two or three would do. His rocks just needed some serious getting off.

“So where’re you from?” he asked as he reached over the counter for a drop-off form.

“Little town outside of Dallas. Keep waiting for the hick to rub off so I sound more like y’all—it takes a little time.” Johnson watched as the guy filled out the form. Billy Frederick. Lived nearby. Office number was in the city proper.

“I have to tell you—that ‘y’all’ will give you away every time.”

“Yeah? I’ll keep that in mind.” Oh, that grin was something else. It just made Billy’s eyes light right up.

He couldn’t help grinning back again. “You need a lift anywhere?” Oh, that wasn’t going to get him to Dottie’s anytime soon. Still, maybe it would be more fun to see that smile again than to get to Dottie’s tonight. It was that good a look on Billy.

“That’d be appreciated, if it’s not too much trouble. I’ll catch the train into the office Monday morning, but the bus ride to my apartment’s a bitch and a half.” A hand was held out. “I’m Billy. Pleased to meetcha.”

“Johnson. Likewise.” He shook Billy’s hand, struck again by the smooth, cool palm. Nice. Very nice. “You left your baby on the lot?”

“Yes, sir, I did. Next to the garage proper. She’ll be good there?”

“Yep, she’ll be just fine there. Let me finish locking up and I’ll run you home.”

He put Billy’s keys on the spokes in the locker, then set the last of the tools under the bench. Stripping off his overalls, he then balled them up and put them under his arm to throw in the back seat—it felt good to get out of them. Then he led Billy out, locking up behind him.